West Indies clinch U19 win over Zimbabwe amid ‘Mankad’ controversy 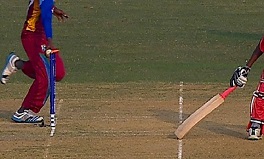 ZIMBABWE – The Under-19 World Cup in Bangladesh has become embroiled in a “Mankad” controversy after West Indies clinched a dramatic two-run win over Zimbabwe through a disputed run-out at the start of the final over of their group match in Chittagong.

The West Indies bowler Keemo Paul, beginning the 50th over of the innings, appeared not to enter his delivery stride before breaking the stumps and appealing for a run-out against the non-striker, Richard Ngarava.

The on-field umpires, Ahsan Raza and Phil Jones, decided to refer the situation to video review, from which the No11, whose bat appeared to be on the line as the bails came off, was given out. The West Indies captain, Shimron Hetmyer, confirmed he wanted to uphold the appeal, which sealed West Indies’ victory and qualification for the quarter-finals at their opponents’ expense.

The disconsolate Zimbabwe captain, Brandon Mavuta, refused to comment on the incident after the game . “We got so close, no comment about it. I don’t have anything to say right now,” he said. “No comment.”

Earlier his side had restricted West Indies to 226 for nine from their 50 overs, with the left-arm spinner Rugare Magarira the pick of Zimbabwe’s bowlers, taking three for 28 from 10 overs. Shamar Springer top-scored with 61 from 69 balls.

Zimbabwe made steady progress in their reply, and looked well set for victory at 209 for six in the middle of the 45th over after a partnership of 62 between Adam Keefe and Wesley Madhevere. But when Springer trapped Keefe lbw for 43, the tide turned – Madhevere was bowled by Springer for 21 and Magarira run out for a duck to leave the last pair needinged 10 more for victory, and qualification from Group C behind the section winners England. They got within three runs, only to be foiled in contentious circumstances when Paul removed the bails. Hetmyer, the West Indies captain, admitted his side may have contravened the spirit of the game but was delighted with his side’s victory. “Cricket is a game of glorious uncertainties,” he said: “We’ve seen this in cricket before.It’s probably not in the spirit of the game, but we’re happy to have won.”

Mankadding is named after the Indian player Vinoo Mankad, who gained notoriety by removing the bails to claim a run-out against a non-striker in the second Test against Australia in 1947 – is a technically legitimate form of dismissal but invariably sparks debate about the “spirit of cricket”, as it did in 2014 when Sri Lanka’s Sachithra Senanayake ran out Jos Buttler of England during a one-day international at Edgbaston.

West Indies clinch U19 win over Zimbabwe amid 'Mankad' controversy

ZIMBABWE - The Under-19 World Cup in Bangladesh has become embroiled in a “Mankad” controversy after West Indies clinched a dramatic two-run win over Zimbabwe through a disputed run-out at the start of the final over of their group match in Chittagong....
Share via
x
More Information