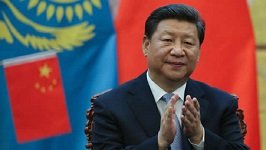 ZIMBABWE – The reciprocal State visit by Chinese President Xi Jinping last year was meant to reassure Zimbabwe of the Asian country’s readiness to assist it, an official has said.

Speaking to African journalists on a 10-month study here under the China Africa Press Centre on Tuesday, Chinese director-general of the Department of African Affairs Mr Lin Songtian said Zimbabwe was being treated unfairly by the West.

“President Xi visited Zimbabwe last year to reassure people that we stand by that country,” he said.

“The State visit was carried out before the Forum on China-Africa Cooperation Summit in Johannesburg (South Africa) which was important.”

Mr Lin said the West started labelling President Mugabe a dictator after he embarked on land reform, which sought to promote equality.

“You see, before 2000, President Mugabe was loved by the West, but when he started redistributing land to the people to them he became a dictator,” he said.

“Things started disappearing from supermarket shelves and there was nothing. Now, Zimbabwe is on the recovery path, struggling, falling and rising up.”

China signed mega deals with Zimbabwe worth billions of dollars in different sectors when President Mugabe visited the Asian country in 2014.

Deals in areas such as infrastructure, energy and power generation, agriculture and trade are at various stages of implementation.

Earlier on, Mr Lin had given the journalists a lecture titled: “Introduction to Sino-African Relations and Cooperation” where he reiterated China’s commitment to helping Africa.

He said a number of African countries needed to put their house in order for help from China to become relevant.

“In Sub-Saharan Africa, not every country is ready,” he said. “Enabling laws and regulations must be put in place and there must be efficiency.

“When China goes to Africa, please be assured that we have learnt our lessons to enhance the countries’ Gross Domestic Product and create jobs.

“We are not going there to loot resources. In the next three years, Sino-Africa relations will be at a higher level with more companies going there to invest and help create wealth. “We will share with you everything about our experiences.”

He said Africa had a great potential “to explode” economically given the resources at its disposal.

“China views Africa as a strategic partner,” he said. “China hopes to see that the relations are profound and sustainable. They should be based on mutual trust to benefit each other economically.

“We shall support each other for peace and have unity with each other.”

Mr Lin said China was doing its best to take its citizens out of poverty, hoping to ensure 70 million people out of 200 million live out of the poverty datum line in the next five years.

China has a population of nearly 1,4 billion.

Mr Lin said the Asian country’s development was being made possible because of stability and unity.

Delivering the first lecture to the African journalists on Monday titled: “Understanding of Chinese Political System” at Renmin University, Professor Wang Yiwei said the country had a long history of progress because of its discipline in politics.

He said China’s approach was based on collectivism, compared to individualism as demonstrated by Western countries.

“In China we understand the differences between the two,” he said. “We believe in our system of a One Party State where there is deliberative democracy where people are united for their views.

An opening ceremony for the China Africa Press Centre 2016 enrollment was held yesterday and attended by ambassadors from several African countries.

It’s 2016, and same old problems for Zimbabwe – this time even fees being paid …

ZIMBABWE - The reciprocal State visit by Chinese President Xi Jinping last year was meant to reassure Zimbabwe of the Asian country’s readiness to assist it, an official has said. Speaking to African journalists on a 10-month study here under the China A...
Share via
x
More Information
x