What The Marriages Act Of Zimbabwe Say On Age, Polygamy, Custody, Property 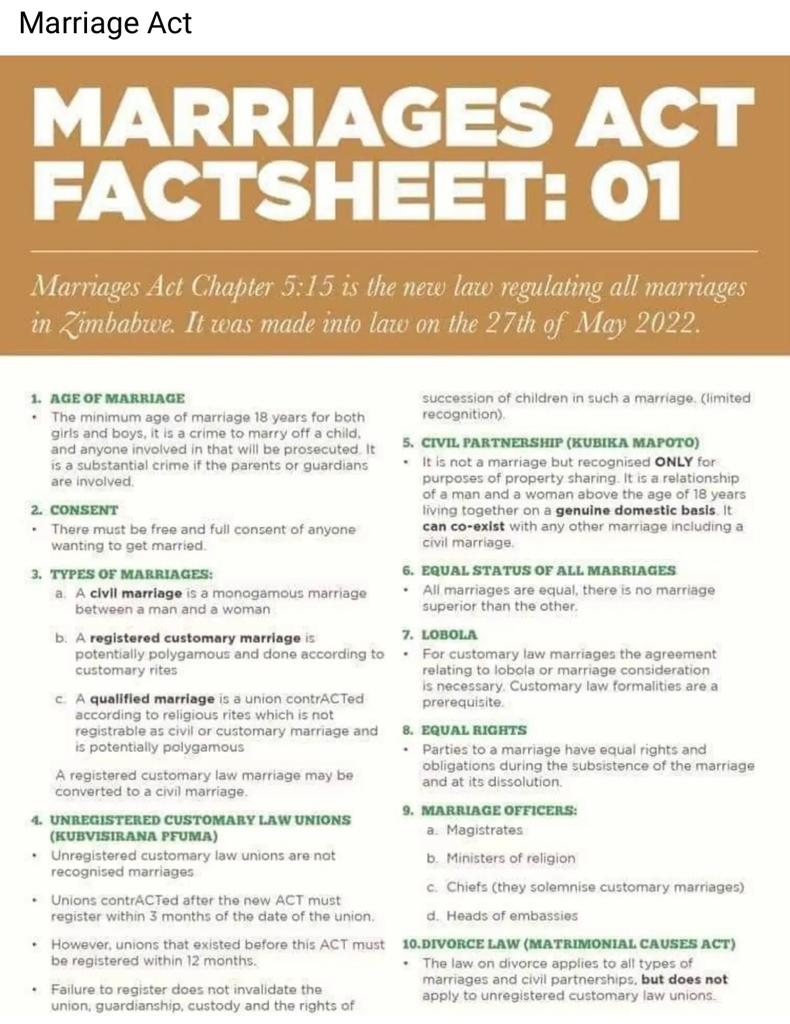 The Zimbabwe Women Lawyers, Veritas, and CGTN have independently put together fact sheets on the new Marriages Act indicating the basics that can help members of the public understand the essence of it. Marriages Act Chapter 5:15 is the new law regulating all marriages in Zimbabwe. It was made into law on the 27th of May 2022.

Law expert, Fadzayi Mahere says a lot of the provisions are yet to be tested in a court of law and there are many legal issues that arise from the Act.

The salient points to note from the Marriages Act:

1.  AGE OF MARRIAGE • The minimum age of marriage is 18 years for both girls and boys. It is, therefore, a crime to marry off a child and anyone involved in that will be prosecuted. It is a substantial crime if the parents or guardians are involved. 2.  CONSENT • There must be free and full consent of anyone wanting to get married. 3.  TYPES OF MARRIAGES:

a). A civil marriage is a monogamous marriage between a man and a woman.

b). A registered customary marriage is potentially polygamous and done according to customary rites.

c). A qualified marriage is a union contracted according to religious rites which is not registrable as civil or customary marriage and is potentially polygamous.

A registered customary law marriage may be converted to a civil marriage.

• Unions contracted after the new ACT must register within 3 months of the date of the union.

• However, unions that existed before this ACT must be registered within 12 months.

• Failure to register does not invalidate the union, guardianship, custody and the rights of succession of children in such a marriage. (limited recognition).

1.  CIVIL PARTNERSHIP (KUBIKA MAPOTO) • It is not a marriage but recognised ONLY for purposes of property sharing It is a relationship of a man and a woman above the age of 18 years living together on a genuine domestic basis It can co-exist with any other marriage including a Cavil marriage. 2.  EQUAL STATUS OF ALL MARRIAGES • All marriages are equal. there t5., no marriage superior to the other. 3.  LOBOLA • For customary law marriages the agreement relating to lobola or marriage consideration is necessary Customary law formalities are a prerequisite. 4.  EQUAL RIGHTS • Parties to a marriage have equal rights and obligations during the subsistence of the marriage and at its dissolution. 5.  MARRIAGE OFFICERS:

b. Ministers of religion

1.  DIVORCE LAW (MATRIMONIAL CAUSES ACT) • The law on divorce applies to all types of marriages and civil partnerships. but does not apply to unregistered customary law unions.

What The Marriages Act Of Zimbabwe Say On Age, Polygamy, Custody, Property

The Zimbabwe Women Lawyers, Veritas, and CGTN have independently put together fact sheets on the new Marriages Act indicating the basics that can help members of the public understand the essence of it. Marriages Act Chapter 5:15 is the new law regulating ...
Share via
x
More Information