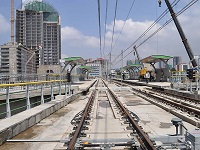 ZIMBABWE – Chinese President Xi Jinping has enjoyed a triumphant visit to Africa. The main purpose of his trip was to chair a meeting of the Forum on China-Africa Cooperation in South Africa with president Jacob Zuma. There, he pledged the enormous sum of $60 billion for African development.

But perhaps more surprising was the stop he made in Zimbabwe along the way.

There were symbolic reasons for the Zimbabwe visit. China supported the liberation struggle, arming and training Mugabe’s guerrilla forces. The two nations have long maintained good diplomatic relations, with Mugabe even being invited to give a lecture in Beijing on the desirability of multi-party politics just three years after the Tienanmen Square massacre. China was sending a signal that it is loyal and rewards loyalty in its direction.

And, as with the recent award of the Confucius Prize to Mugabe, the Chinese are now putting a series of consolation prizes the way of the elderly president and his economically beleaguered country.

It will generously aid development, particularly by investing in infrastructure projects, but it will not provide budgetary support, nor balance-of-payments support. Those are parts of the Zimbabwean house that the government must get into order by itself.

There were probably behind-the-scenes discussions about greater budgetary transparency – of the sort the Chinese had with the Angolans ten years ago – should there ever be any Chinese budgetary support in the future. In short, to open up the cash flow, an end to oligarchic pillaging of the economy would be the price.

As for the $60 billion, this is part of a huge international commitment by the Chinese. All developing regions of the world are included in a whole range of new funds and facilities.

All this investment is drawn from China’s $3 trillion in foreign reserves, and even greater amounts of domestic reserves, all unaffected by the current slowing of the Chinese economy.

The most conspicuous is the plan to essentially build a new Silk Road to boost trade across South Asia and the Transcaucasian region, all the way to Europe. But there are many more, and the key motif in all the commitments is infrastructure – particularly communications and transport. So roads and rail can be built with infrastructural amenities like schools and hospitals along the route, as well as telecommunications and electricity.

It is a staggeringly ambitious series of globally transformative undertakings. No one can say the Chinese lack vision.

But not all of the money is aid in terms of grants. Of the total, $35 billion is in loans and credits. And the small print suggests that not all these funds will be easy to access. The Chinese will be increasingly strict in terms of appraisal and due diligence processes.

Even so, there is nothing the West can do to match this concentration of effort – nor to emulate the communications infrastructure model.

At a stroke, all other development will be enabled. Governments will be able to reach – and administer – far flung territories. Ordinary people will be able to communicate and transfer money much more easily. And the educational provision is not about the primary schools so beloved of Western aid. The Chinese are simply saying Africa has grown up and needs universities.

President Xi will be thinking his African visit was a huge success in terms of huge goodwill and good relations with a key emerging continent. He is pursuing development on his own terms but with a careful language of equality that is so often lacking.

When Xi met Mugabe, money was bound to flow freely

ZIMBABWE - Chinese President Xi Jinping has enjoyed a triumphant visit to Africa. The main purpose of his trip was to chair a meeting of the Forum on China-Africa Cooperation in South Africa with president Jacob Zuma. There, he pledged the enormous sum of ...
Share via
x
More Information
x