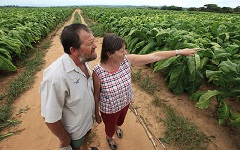 ZIMBABWE – Mr Rankin said he prepared to leave the house and police dragged him from his vehicle, handcuffed him and drove him to a police station nearly 90 miles from the farm.

Mr Rankin, who was later released and is now staying with relatives on a nearby farm told the Telegraph he was “terribly shocked”. His lawyer said the police had no arrest warrant and told her “leave us” when the officers were informed their actions were unlawful.

Barry Rankin, 32, the older of the three Rankin children who worked on the farm said on Sunday: “I think we have finally accepted that we are not going back to the farm. I have also cleared out our house on the farm to avoid our things being broken up as happened when the police took my parents furniture and their piano.”

He took the precaution of moving his wife and three young children to Harare late last year.

“We have now consulted with our pastor and we know it is over,” he said. “I don’t know what will happen to the tobacco crop as we are not allowed to be here and work.”

He said his parents were staying with relatives in the area. “We are all finished,” he said.

The Rankin’s lawyer Nyarodzoh Maposa said: “All of this is lawless. It’s disgraceful, there’s no charge against him.”

An arrest warrant was issued for Mr Rankin, 57, in January when he failed to vacate the property as per the land claim, but was later suspended.

Dr Nyatsuro, a 45-year-old GP who runs a slimming clinic in Nottingham, arrived at the tobacco farm, Kingston Deverill, in September with a letter from the government allocating the land to him.

Political sources in Harare suggested the doctor – whom Mr Rankin said was accompanied by his wife, Veronica and government officials, had family connections to Grace Mugabe, the president’s wife.

Two weeks after Dr Nyatsuro departed, around 20 settlers moved into a vacant cottage on the farm in Centenary district, 145 miles north of Harare.

When the Telegraph visited the property earlier this month, the settlers were living in the cottage on the estate and one of them was using a car registered to Dr Nyatsuro according to documents at the vehicle registry office in Harare.

Mr and Mrs Rankin said they were facing mounting legal bills to defend themselves against a prosecution by the state for allegedly “trespassing” on the land they had farmed for over 30 years.

Earlier this month the Rankins said they could not “take the pressure any more”, but did not want to leave before harvesting a £300,000 tobacco crop they obtained a loan to plant.

“I would leave this farm, walk away, if the British pay me compensation for my farm and all the things on it,” said Mr Rankin.

The couple, who used to own 2,000 acres which has gradually been whittled away, also employ 40 permanent workers who live with their families on the farm and at least 20 “casuals” during peak season.

About 20 white farmers and their workers were killed and many more assaulted during the land invasions that started in 2000 and saw around 90 per cent of white-owned farms seized, helping to bring the country’s economy close to collapse. In February last year, there were warnings that Zimbabwe’s approximately 300 remaining white farmers were under renewed threat from a rash of new land claims.

Peter Steyl, the president of the Commercial Farmers’ Union, said that Mr Rankin had been doing “the best he could under difficult circumstances”.

“Zimbabwe is in deep trouble and no one is taking responsibility,” he said.

A Foreign Office spokesman voiced concern that the seizure of the farm “did not follow the process as described by the constitution”.

“We are aware of the allegation that the beneficiary of this farm may be a British citizen,” added the spokesman. “We will consider what further action to take.”

Lawyers for Dr Nyatsuro said he is a mere third party in the dispute which is between Mr Rankin and the state.

They deny Dr Nyatsuro’s applied for specific ownership of Mr Rankin’s farm and say it was allocated to him because it was state land and it was up to Mr Rankin to prove otherwise. They also said that the police intervention was not at the behest of Mr Nyatsuro and he has not been awarded possession of the farm following police action.

In a statement to the Nottingham Post, a lawyer acting for the couple said they were awarded the farm “in full accordance with the requirements of the Government’s Minister of Land and Rural Settlement”.

The statement denied that Dr Nyatsuro was among those who went to take possession of the farm.

Biti apologises to Zimbabweans for sleeping on duty

ZIMBABWE - Mr Rankin said he prepared to leave the house and police dragged him from his vehicle, handcuffed him and drove him to a police station nearly 90 miles from the farm. Mr Rankin, who was later released and is now staying with relatives on a nearb...
Share via
x
More Information
x