Mandizvidza who wrote six subjects in 2015, is also the top student at his school and said he wanted to study actuarial sciences.

The boy was not allowed to register all six subjects and had to sit for Business Studies in June and got a B while the remaining five subjects were written in the November examinations and he obtained 5 As.

“My combination was Maths, Physics and Chemistry but I studied Further Mathematics, Accounting and Business Studies on my own. I have always had a passion in Maths and got the encouragement from my father who was also good in the subject,” he said.

Mandizvidza said studying the extra three subjects required him to study up to 2am during the week and he would relax during the holidays.

“I worked on my own. I was not able to attend the lessons for the extra subjects because the timetables clashed. The teachers would assist me towards examinations,” he said.

Mandizvidza did his Ordinary Level at St Paul’s Musami in Murehwa and passed 12 subjects with 10 As and 2 Bs.

He said he was part of the United States Student Achievers Programmes (USAP) that promotes academically gifted students from Zimbabwe to study in America.

“I have applied for the programme and still waiting for the response. I hope I will be considered for the scholarship programme,” he said.

Mandizvidza’s mother, Mrs Daphne Mandizvidza said at first she discouraged her son from studying more than three subjects as she was not sure he would stand the pressure.

“I knew my son was intelligent but I did not want him to take many subjects at A-Level. Munashe scored four points at grade seven at David Livingstone School and passed his O- Level well but I was not sure he was capable of studying many subjects at a higher level. I am impressed and overwhelmed by his hard work,” she said.

According to the St Faith High School results list, 108 students sat for Advanced level and 92 of them had 10 points and above. Of these 28 students had 15 points, while 17 had 14 points. 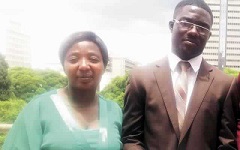