Who is benefiting from deepening Zimbabwe, equatorial guinea ties? 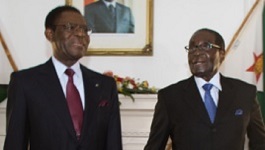 In remarks after closed-door meetings, President Mbasogo hailed Mr. Mugabe as a man of sound knowledge. Mr. Mugabe seems to be increasingly relying on Equatorial Guinea leader for financial bailouts that are not always in the public domain, but have been filtering in the media of late.

But where did this great friendship begin and how has it benefitted the two countries?

Ties between Harare and Malabo were strengthened in 2004 when Zimbabwe foiled an attempted coup, known as the Wonga coup attempt by mercenaries to topple President Nguema and replace him with exiled opposition leader Severe Moto. The Spanish-based Moto is the most recognizable opposition leader in Equatorial Guinea.  He has established a government in exile.

In March 2004, Zimbabwe intelligence officers at Harare International Airport impounded a plane, which had flown in from South Africa carrying the alleged coup leaders led by former Special Air Service officer, Simon Mann. The marketing manager of the Zimbabwe Defense Industry and state witness, Hope Mutize, said in court that Mann had paid him a deposit on weapons worth $180,000 in February 2004.

Military expert Dr. Martin Rupiya concurs with the observation that President Mugabe and Mr. Mbasogo were drawn even closer after the foiled coup.

In January 2012,  Mr. Mbasogo himself admitted as such saying after a visit to Harare. He said, “On the bilateral level you are aware that between Zimbabwe and Equatorial Guinea there are strong links between ourselves, more so there have been deeply rooted relationship from time to time. Zimbabwe was instrumental in helping us over foiling the attempted coup that happened in 2004 against the Equatorial Guinea.”

Director of the Washington based Equatorial Guinea Justice, Tutu Alicante says, Mr. Mugabe and President Mbasogo have more things in common than the foiled coup- their alleged love for power.

It is this alleged trait in some African leaders that U.S president Barack Obama criticized when he addressed the African Union summit last year urging leaders to have term limits.

Harare Insiders say Mr. Mbasogo also bailed out the Zimbabwe government between 2006 and 2007, when the country was being ravaged by hyperinflation by providing a fuel importation facility of US$220 million. This forms part of the Reserve Bank of Zimbabwe’s US$1,3 billion debt.

In January, President Mbasogo asked Mr. Mugabe for a security team comprising of police officers and soldiers to help counter terrorism when Equatorial Guinea hosted the African Cup of Nations.  The team provided VIP security, intelligence and helped to man key institutions. Equatorial Guinea met all the expenses of the team.

Recently, the Zimbabwe Defense Forces deployed a team of trainers to Equatorial Guinea to train that country’s military officers on “operational and logistic matters”, according to the state-owned Herald newspaper.

The report said the delegation was composed of members of the Zimbabwe National Army and Air Forces of Zimbabwe.

“The Equatorial Guinea had realized some training deficiencies on their defence forces, hence the request,” the ZDF Commander General Constantine Chiwenga was quoted as saying during a send-off ceremony last week. Rupiya says this development is helping both countries.

Opposition parties in Malabo say their president is one of the most despotic in Africa and his heir stands accused of squandering millions of public funds on Michael Jackson memorabilia and the majority of its people live on less than $2 per day.

But Mr. Mbasogo, Africa’s longest serving head of state, has enjoyed what critics describe as an “image makeover” since enlisting the help of powerful Washington DC lobbyists. President Mugabe has attempted this public relations campaign though it failed.

A Chicago man working with Harare was sentenced to 15 months in prison last year for illegally lobbying on behalf of the Zimbabwean leader and others to try to lift economic sanctions against the African nation.

Reports by the U.S Senate in 2004 and 2010 found that millions of dollars of Equatorial Guinean oil income had been deposited in private bank accounts in the US, Spain and Luxembourg, prompting investigations by the US Justice Department and authorities in France and Spain.

U.S authorities began efforts to seize $70 million worth of property belonging to Obiang’s notorious son and vice-president, Teodorin Nguema Obiang Mangue, whose assets include a $30m mansion in Malibu, a $38.5 million Gulfstream jet, and more than $2 million in Michael Jackson memorabilia.

In France – where Teodorin is subject to an arrest warrant – police recently seized 11 luxury cars belonging to the 41-year old, including two Ferraris, two Maseratis and a Rolls-Royce, as well as a $40 million Paris mansion with a disco, spa room, hair salon, gold and jewel encrusted taps and balcony views of the Arc de Triomphe.

Mavhinga says both Mr. Mugabe and President Mbasogo want their close family members to succeed them

Corruption, poverty, and repression continue to plague Equatorial Guinea under President Mbasogo, who has been in power since 1979. Vast oil revenues fund lavish lifestyles for the small elite surrounding the president, while a large proportion of the population continues to live in poverty.

Tutu says the relationship has only benefitted the two leaders not the people they lead.

Mangwana argues that Mr. Mugabe and President Mbasogo are being targeted because they are pan Africanists.

Isolation, according to some political analysts, is what has drawn the two leaders together. But their spin doctors argue it is their ideology. Mr. Mugabe and President Mbasogo say Africa wants to see reforms enacted at the U.N. Security Council, and they want the continent to be given at least one spot as a permanent member.

Who is benefiting from deepening Zimbabwe, equatorial guinea ties?