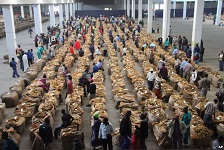 ZIMBABWE – The World Health Organization says there has been a sharp increase in smoking by school-age children in Zimbabwe, despite the illegality of selling tobacco products to children. The findings are part of WHO’s Global Youths Tobacco Survey, released Wednesday. Sebastian Mhofu reports from Harare.

The World Health Organization report released Wednesday in Harare revealed that 20 percent of adolescents in Zimbabwe are consumers of tobacco products. The Global Youth Tobacco Survey in Zimbabwe targeted youths between 13 and 17 years old. It was funded by the United States Center for Diseases Control (CDC) and the World Health Organization. The WHO’s Dr. Anderson Chimusoro urged the government to increase public awareness of the health issue.

“The main worry is that this is almost equivalent to the results that we have in the health and demographic survey which show that 22 percent of adults population is estimated to be using tobacco products,” said Chimusoro. “I have a number of issues that we think as WHO the country can take on board to help us in this issue. We propose that the government should promote and strengthen awareness on tobacco control issues including in schools.”

The survey revealed that some youth smoke while on school premises. In Zimbabwe, smoking and selling tobacco products is prohibited among children under the age of 18.

Public health specialist Shungu Munyati, who headed the research, said President Robert Mugabe’s government must enforce laws on smoking if stamping out smoking among school age youth is to be achieved. But she says, since tobacco plays a role in Zimbabwe’s economy, it might be a problem.

Tobacco is one of the cash crops that Zimbabwe’s tattered economy is depending on for recovery. It contributes 8.5 percent of Zimbabwe’s Gross Domestic Product.

WHO worried by high rate of schoolchildren smoking in Zimbabwe

ZIMBABWE - The World Health Organization says there has been a sharp increase in smoking by school-age children in Zimbabwe, despite the illegality of selling tobacco products to children. The findings are part of WHO’s Global Youths Tobacco Survey, rele...
Share via
x
More Information
x