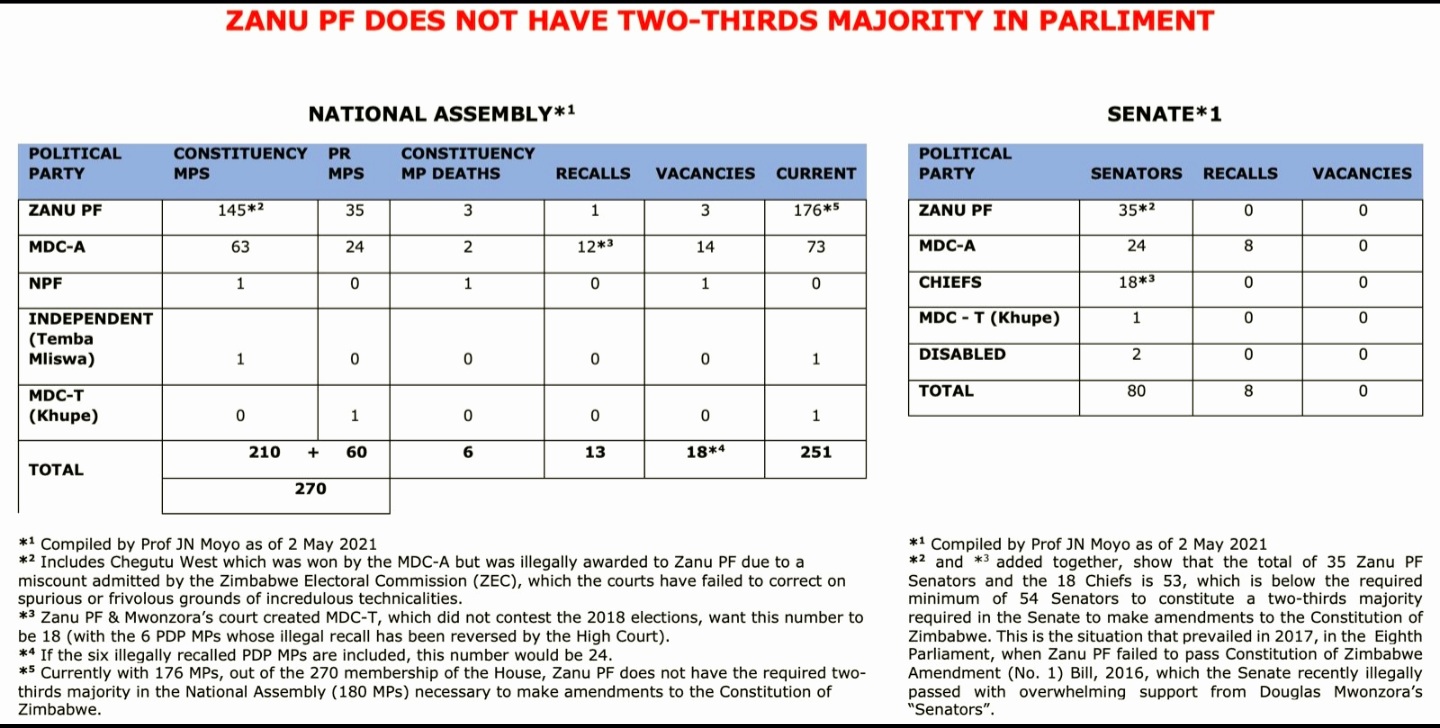 Zimbabwe is on the brink of descending into an era of an imperial presidency where powers are concentrated in one person and checks and balances (which keep government accountable) are undermined.

This is what will be achieved if Constitutional Amendment (No.2) Bill passes in the Senate today.

Today, the Senate will have its Third and Final Reading of Constitutional Amendment (No.2) Bill and vote on whether to pass the amendments. To pass, the Bill must get at least 54 affirmative votes which is two-thirds of a total membership of 80 seats in the Senate.

The vote will be on a knife edge! Zanu PF does not have a two-thirds majority in the Senate even assuming that all 18 traditional chiefs will vote with Zanu PF as they typically do. Therefore, Zanu PF likely won’t be able to pass the amendments without the participation of MDC senators.

This is what happened in the Lower House (the National Assembly) where Zanu PF did not have a two-thirds majority and had to rope in 15 MDC-T MPs from the Douglas Mwonzora camp to get them over the line. We can’t afford a repeat of that in the Senate.

While some MDC Senators have opposed the amendments during debate in the Senate, the problem is that the Mwonzora-led MDC-T (which now appears to have effective control over all opposition senators) has not come out clearly with a party position on whether the party is for or against the amendments and has told senators to “vote their conscience”.

In a situation where the opposition effectively has the deciding vote on whether or not to entrench dictatorship, this is an appalling abdication of responsibility by the party leadership and effectively hands the amendments to Zanu PF on a silver platter.

Why is Constitutional Amendment (No.2) Bill bad for Zimbabwe?

There have been reports of a deal struck between the Mwonzora-led MDC-T and Zanu PF whereby a few MDC senators will vote for the Bill while others make noise against it in order to save face. I am not going to address that issue, but deal only with what is not in dispute: that the MDC-T has failed to take a position on the Bill because they say there are both “good” clauses and “bad” clauses.

The supposedly “good” clauses are:

I am a strong supporter of the empowerment of women and youth. But these clauses are a trap to draw in MDC Senators and get them to vote in favour of all of the terrible clauses as well.

Unfortunately, senators have to vote “Yes” or “No” to the whole Bill — they can’t pick and choose — so they have to decide whether the Bill is overall “good” or overall “bad”. If MDC-T falls for such an obvious trick, Zanu PF will keep throwing them crumbs to gain their support for the entrenchment of Executive power again and again.

But more importantly, these amendments do not empower women and youth and there are much better alternatives available for empowering women and youth which don’t require amending the Constitution. Why should women settle for only 21% of the seats when the Constitution says women are entitled to 50:50 representation in Parliament?

Has the women’s quota empowered women?

The women’s quota was meant to be a stop-gap measure to inject an extra 60 women into Parliament for 10 years, in order to allow Parliament time to come up with better measures that address the systemic marginalisation of women in politics and achieve 50:50 parity. The quota is now past its sell-by date and is having a stagnating and disempowering effect on women’s political participation.

Across all political parties aspiring women candidates have been discouraged from running for constituency seats and told they should instead seek inclusion in their parties’ women’s quota lists. This has actually led to a decrease in the number of women being elected for constituency seats. This is demonstrated clearly by the numbers:

This has led to women’s representation in the National Assembly stagnating at around 34% (when combined with all the women elected through the women’s quota) over the past two elections. But the Constitution says that women are entitled to a 50:50 representation. This is unacceptable and it doesn’t have to be that way. 50:50 is achievable, as explained below.

How can Parliament ensure women and youth’s political advancement without amending the Constitution?

Simple! This could easily be done in one of at least two ways. Instead of amending the Constitution, Parliament could:

…or, if political parties feel that a legal requirement is too restrictive on their internal primary processes, Parliament could simply create a financial incentive to encourage political parties to ensure the political advancement of women and youth within the parties by doing the following:

And where would the money come from for the bonuses paid to parties in the second proposal? Well, there will be 70 less MPs if this proposal is adopted instead of the one in Constitutional Amendment (No 2) Bill, so there will be money left over which can go towards financing women and youth’s political advancement within political parties instead.

So, the women and youth quotas are no excuse to pass the Constitutional Amendment (No 2) Bill which will be devastating to our democracy and the rule of law and, in any event, will not empower women and youth.

So what should MDC senators do?

MDC senators should vote “no” to the amendments. If MDC senators are still unsure how to vote or they feel under pressure to vote “yes”, they should simply abstain or stay away from Parliament today. It’s not the “no” votes that really matter but the number of “yes” votes. The future of Zimbabwe is in the hands of MDC senators. Please don’t be used by Zanu PF to entrench dictatorship.

Doug Coltart Zimbabwe is on the brink of descending into an era of an imperial presidency where powers are concentrated in one person and checks and balances (which keep government accountable) are undermined. Doug Coltart, Human Right Lawyer with Nyambira...
Share via
x
More Information