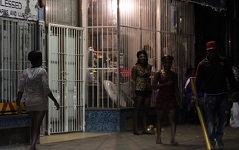 ZIMBABWE – The pull of forbidden pleasures has always been known to be strong, particularly in circles where taboos hold no sway, but some Zimbabwean couples have taken it a notch higher through a new practice of wife-swapping.

Although there are no strings attached, those involved in the swinging lifestyle claim that it helps strengthen bonds of friendship.

In one case, two couples from a Harare church decided to do a swap, but after some time, one of the men decided he wanted his friend’s wife for keeps, and that led to the breakdown of relations between the two families.

“This was not meant to be a permanent arrangement, but then my husband and my friend decided they wanted to stay together for good, but I was not happy,” confided the woman, who lost her husband to her friend in a swap deal that went awry.

Another couple confided to NewsDay that when a church pastor (name supplied) was seconded to their assembly, he gave a sermon about adultery, but almost the whole assembly was upset such that they warned him to stop interfering in their private lives.

“The assembly warned the pastor that what they practised was not adultery as it was consensual between married couples. We also told him to mind his business lest he was jettisoned from the assembly. He changed the theme after that chastisement,” the woman said.

The woman’s friend, who is also involved, chipped in: “We practice swinging simply for variety, but it can be for days, a week or a month, or occasionally whenever we feel like it. We had a couple that we invited for dinner, and when the husband was asked by another man if he could caress his wife, he got confused. After the guy explained the practice, that couple decided to walk out.”

In some cases, several women can indulge in sex with one male partner, while others cheer them on.

“We can call for a party with a minimum of five couples. Although the majority of us are married, some may choose to bring along their girlfriends. We will be relaxed, having drinks,” another source said.

“What we do, however, is not motivated by beer. We love what we do. We will be semi-naked during the party and free to do anything, from kissing to caressing in full view of others. There is no jealousy at all. After the party is finished, everyone goes home.”

He attributed the new trend to modernity and the encroaching of cosmopolitan cultures into Zimbabwe with people who have had stints in the Diaspora spearheading the practice.

“Honestly, that is alien to our culture as Zimbabweans, where we have high respect for the institution of marriage or relationships. I cannot believe that we have sunk to such levels. I’m sure this is influenced by heavy consumption of pornographic material,” Itai Mukwize said.

In Western countries, the practice of swapping partners is rife at private sex clubs, where it is believed to strengthen friendships.

In Africa, there are also cultures in which the practice is celebrated, particularly in Namibia, where wife-swapping among nomadic tribes is said to have been practiced for generations.

Marriage counsellor and NewsDay columnist Kilton Moyo said reports of wife-swapping in Zimbabwe were rather shocking.

“This is a shock. But well, people in the world can do anything as much as the prince of this world wants them to do. There is no wife-swapping in human life. As far as I know and understand, this is a doctrine of demons. It is influenced by sinful nature and must not be allowed in a normal society like ours,” Moyo said.

Harare provincial police spokesperson Simon Chazovachii said while no arrests had been made, the police had noted the trend with concern, particularly through social media networks.

“Close neighbours should make a report. We haven’t had a formal report except on social media. If a report is made, the police will be forced to attend and those people will be arrested right there,” Chazovachii said.

The practice seems to feed into a new culture that has also seen an increase in nude and pool parties, particularly among teenagers, where people end up engaging in indiscriminate sexual intercourse with whoever is available and willing.

Investigations by NewsDay also showed that there are several websites where locals wanting to engage in swinging could hook up with potential partners be they married, singles, bisexuals or gays.

According to one of the directories, Spicy Match, “looking for the perfect swingers in Zimbabwe is practically looking for a needle in a haystack” before providing a selection of swingers locally.

Another site, The Adult Hub, lists potential sex contacts and says it has clients in Harare, Mutare, Kwekwe, Chitungwiza and Marondera.

Some of the clients post their pictures although they use pseudonyms.

Sometime in 2014, a Florida couple, said to be devout Christians, claimed it was joyfully spreading the love of Christ and the Bible through their unconventional wife-swapping and fitness ministry.

Dean Parave (49) and his wife Cristy (44) were quoted saying they believed the community of fitness swingers they created and promoted on Facebook was “God’s plan”.

“I feel like right now this is God’s plan,” Cristy was quoted. “The Bible doesn’t talk about swinging, specifically. I just feel like, as a married couple, if you agree on something together, then it’s okay. If it’s not, like I said, judgment day, I’ll find that out.”

The Florida couple, who met at a bodybuilding competition, are interested in sharing their beliefs and their spouses with others who feel similarly.

They are said to have started their online network seven years ago.

The couple said their swinger lifestyle did not conflict with their Christian beliefs and they regarded it as a kind of ministry.

“So far today, God hasn’t told me, ‘Dean stop that, it’s a sin. I don’t want you to do that.’ Until He does that, I’m going to keep trying to help as many people as I can,” Parave was also quoted saying.

Tendai Biti has respect and high regard for Tsvangirai

ZIMBABWE - The pull of forbidden pleasures has always been known to be strong, particularly in circles where taboos hold no sway, but some Zimbabwean couples have taken it a notch higher through a new practice of wife-swapping.  There is no need to go to ...
Share via
x
More Information
x