Will Zimbabwe sport ever get state financial support? 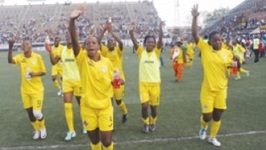 ZIMBABWE – The Zimbabwe sports family is looking forward to a bright 2016 but only if the government invests in the industry.

Since joining the international sporting world in 1980, the Zimbabwean government has not invested a lot in sport even though it has always expected good results.

Now and then Zimbabwean teams have been forced out of international participation as they could not afford the travelling costs involved.

The financial situation within the sporting world has been getting worse by each day as the corporate world has not been supportive due to the harsh economic climate prevailing in the country.

Even those who have been very supportive have been cutting their costs as evidenced by Delta Beverages who have reduced their sponsorship for the Annual National Sports Awards from the initial $50,000 down to $20,000.

Sports analyst Moses Gunduza says the corporate world no longer has the capacity to sustain sport in the country due to the prevailing economic climate.

He adds that only the government at this time can keep sport alive in the country.

Even Pearson Machona of the newly created Aero-Modelling Federation of Zimbabwe believes only the government’s financial involvement will help stimulate sport development.

Zimbabwe’s Warriors are joint top of the table in their qualifying group for the 2017 Africa Cup of Nations but Zimbabwe National Soccer Supporters Association committee member Lazarus Banda says this dream might not be realized if there is no money.

Viola Musariri from Special Olympics Zimbabwe says they are hoping for more support in 2016 after bringing home 12 medals from the 2015 World Games in Los Angeles.

In response, the new Sports Minister Makhosini Hlongwane has promised a better 2016. He says he has set up a meeting next week with the Minister of Finance Patrick Chinamasa with the view of having the government fund all national teams.

The sports minister says he will also be pursuing with the Minister of Home Affairs Ignatius Chombo to see to it that sport receives its share from gaming as outlined by the gaming act.

Zimbabwe has a number of international engagements lined up in 2016 which the minister feels they need to be supported.

The Zimbabwe national soccer team will be travelling to Rwanda in January for the Africa Nations Championships.

The women’s soccer team, the Mighty Warriors, also need to go into camp early in preparation for their 2016 Rio Olympic Games appearance.

As if this is not enough, Zimbabwe will also be hosting the 2016 under-19 rugby World Cup.

The question, however, is: Does the government have the financial resources to back such adventures when it is failing to civil servants’ bonuses?

Will Zimbabwe sport ever get state financial support?

ZIMBABWE - The Zimbabwe sports family is looking forward to a bright 2016 but only if the government invests in the industry. Since joining the international sporting world in 1980, the Zimbabwean government has not invested a lot in sport even though it h...
Share via
x
More Information