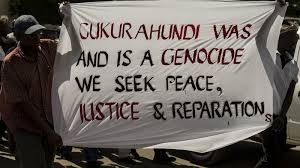 BULAWAYO – A human rights advocate has said that President Emmerson Mnangagwa cannot solve Gukurahundi on his terms, but must allow victims to lead the resolution process.

For the past two years, activists have accused the government of delaying in solving Gukurahundi, claiming President Mnangagwa was using a divisive strategy to set institutions and people against each other.

President Mnangagwa took away the constitutional mandate of the National Peace and Reconciliation Commission (NPRC), one of the five independent commissions established under Zimbabwe’s constitution, was set up to promote national healing and reconciliation when he assigned the task to traditional chiefs.

He resolved that each chief would spearhead the resolution of Gukurahundi on a case by case basis. The chiefs are currently working on a template.

Some felt that the National Council of Chiefs was being used by President Mnangagwa to sanitise his role in the genocide and warned chiefs not to betray their communities.

In previous engagements with the chiefs on the emotive issue, President Mnangagwa submitted that chiefs from the Midlands community must not be part of the Gukurahundi outreach programmes, yet the Midlands was also adversely affected.

The Matabeleland Collective then developed some cracks after meeting with the president as some members felt uneasy after they were viewed as aligned to the Zanu-PF led government.

These actions, activists have said, show that President Mnangagwa was trying to evade accountability.

Human rights advocate, Siphosami Malunga, said since there was no question that crimes of humanity were committed during Gukurahundi, there must be consequences and accountability.

“How do you make sure there is accountability, some people have suggested the ICC. It’s not possible to take Gukurahundi to the ICC for many reasons but that’s not the only way of having accountability. Where there is crime means there must be justice,” he said in his address at the launch of the Healing and Reconciliation Film Festival, hosted by the Centre of Innovation and Technology, Monday.

Malunga said he was “very excited”, even though he was sceptical when President Mnangagwa said he was going to deal with Gukurahundi.

“I felt the current president (Mnangagwa) went further than the former president (Robert Mugabe) when he said was going to deal with Gukurahundi, knowing his role. But also, it’s never too late for you to see Jesus, people see Jesus at any point sometimes long before they die, sometimes just before they die. Who better to deal with Gukurahundi than President Mnangagwa,” he quizzed.

The human rights advocate indicated that if Mnangagwa can use the office of the president to fix Gukurahundi then he must do so, but not on his terms.

“No, it cannot be on his terms, he is conflicted for goodness sake. He must accept and understand this – you cannot be a judge in your own case. You cannot choose a judge in your own case, a case that affects you. You can facilitate justice but respect the victims’ goodness sake. Don’t rub salt into their wound and try to manage a process so that it is most favourable to you, both process and outcome,” Malunga said.

Malunga noted that the end process cannot be favourable to perpetrators, as people were already dead.

“We know the numbers and you were implicated but you can still go down in history, as the man who left the country with a brighter forward path. It’s possible,” he said.

“People just want to know where their son is. ‘You took my son, where is he? Some people want to know where their son was buried. Some people want to be able to talk about their children, some want the whole world to know their child was taken and never saw him. Surely, you cannot stop people from doing that, even God does not do that. You are not God.”

Malunga said everyone should all work towards resolving Gukurahundi.

“Let’s support the government in its quest to resolve Gukurahundi, help the government, tell the government how we think Gukurahundi should be resolved. We must not keep quiet because there will be no resolution. Many of our leaders are in their 80s, some 70s, in 10 to 15 years they will be gone but what legacy have they left? They have left a completely divided society, on ethnic ground yet Zimbabwe was never that,” the human rights activist indicated.

“We must keep encouraging leadership in Zimbabwe to resolve Gukurahundi, not on their terms though but on our terms, as the victims of Gukurahundi.”

Let Us Cultivate A Culture Of Planting Trees: Chamisa

You cannot solve Gukurahundi on your own terms, Mnangagwa told

BULAWAYO - A human rights advocate has said that President Emmerson Mnangagwa cannot solve Gukurahundi on his terms, but must allow victims to lead the resolution process. For the past two years, activists have accused the government of delaying in solving...
Share via
x
More Information
x