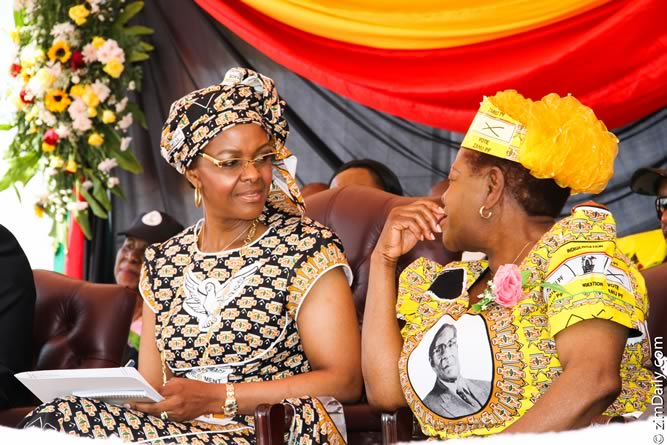 Harare – Zimbabwean First Lady, Grace Mugabe, told a gathering at Murombedzi Growth Point in Zvimba that the country would miss the veteran leader when he is gone, according to reports.

Grace’s remarks came amid continued factionalism within the ruling Zanu-PF party, as many positioned themselves to take over from President Robert Mugabe, 91, when he finally leaves office.

“There will come a day when [president] Mugabe will not be there and people will regret and miss his leadership,” the state-owned Herald newspaper quoted Grace as saying.

The first lady said the nonagenarian had made huge sacrifices for the country and wanted the best for the future generations.

“Not many people are able to make the sacrifices he [Mugabe] makes. He puts his all to represent his people. He is someone who wants the best for the present and future generations,” she said.

A few weeks ago, Grace made headlines when she told a crowd at a function in Binga, Matabeleland north province, that God was not convinced by the calibre of would-be successors of her husband, which was why he continued to lead the country.

Grace suggested that Mugabe continued to labour in office at the age of 91 because God wanted him to.

Mugabe has ruled Zimbabwe since independence in 1980. His Zanu-PF party has already endorsed him to stand in the 2018 presidential elections, when he will be 94.

According to New Zimbabwe.com, Mugabe’s critics say he has destroyed what was, at independence, one of Africa’s most promising economies.

They cite policy missteps and his violent and chaotic land reform programme as some of the factors that have caused turmoil in the country’s economy.

The opposition Movement for Democratic Change (MDC) led by Morgan Tsvangirai, however, said on Thursday that it was time for Zimbabwe to look beyond the “Mugabe must go” hype.

“Mugabe is now ‘yesterday’s’ man and Zimbabweans should start preparing for a post – Mugabe era. Look, the man is 91 and he is clearly not in the best state of both physical and mental health. We now have to develop policies that go beyond the ‘Mugabe must go’ hype,” MDC spokesperson Obert Gutu told News24.

The southern African country is currently reeling under severe economic hardships which have seen more than 20 000 people losing their jobs in the past month.

Mugabe’s state of the nation address (Sona) early this week reportedly gave no hope for Zimbabweans as he failed to address issues related to job creation.

Harare – Zimbabwean First Lady, Grace Mugabe, told a gathering at Murombedzi Growth Point in Zvimba that the country would miss the veteran leader when he is gone, according to reports. Grace’s remarks came amid continued factionalism within the ruling...
Share via
x
More Information