Young boy commited suicide for not having new clothes for christmas 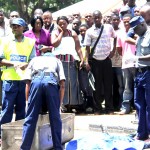 Close sources said on December 23 at around 10am the boy from Gukwe Village under Chief Chinamhora approached his mother, Ms Miritesi Magetsi (46), and asked her to buy him clothes for Christmas.

It is alleged that Magetsi said she was facing financial challenges and could not find the money to buy him the clothes.

It is said that the boy later that night told Ms Magetsi that he was going to commit suicide if she failed to buy him the clothes.

According to the sources, the following morning the boy, in the company of his younger brother, proceeded to Chikakai Hardware where he bought rat poison.

It is understood that the boy went on to drink the poison in front of his sibling before he started crying complaining of stomach pain.

Police sources said Chinamhora police officers attended the scene and rushed the boy to Royce Clinic where he died on admission.
The body was taken to Makumbe Hospital mortuary for post-mortem.

However, efforts to get an official comment from Mashonaland East assistant provincial police spokesperson Assistant, Inspector Tendai Mwanza were fruitless as his mobile phone went unanswered.

Young boy commited suicide for not having new clothes for christmas

ZIMBABWE - A 16-year-old Chinamhora boy last week committed suicide by drinking rat poison after his mother declined to buy him new clothes to wear on Christmas Day citing financial challenges. Close sources said on December 23 at around 10am the boy from ...
Share via
x
More Information