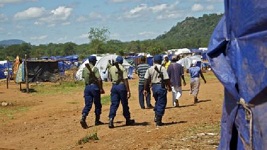 ZIMBABWE – In the Youth Forum, Studio 7’s Tatenda Gumbo speaks with Reason Wafawarova, regarded by many to be the brains behind the controversial National Youth Service (NYS) program launched in 2001.

As Wafawarova explains, the National Service Act of 1978 put in place by the colonial regime of the late former Prime Minister Ian Douglas Smith, to set up a youth service.

The program mobilized young people for compulsory military service after failing to gather enough volunteers to fight against the armed liberation war forces.

After independence from British rule in 1980, the Ministry of Political Affairs, the headed by Brigadier Agrippa Mutambara, attempted to start a National Service Center, but the program failed to get off the ground.

The National Youth Service Act of 1999 further legalized the creation of the national youth service as an important component in youth development.

“We did not want to train a militia. We wanted to develop a national youth who is disciplined, patriotic and self-reliant, as well as one who is a responsible citizen, who promotes and fosters national unity,” said Wafawarova.

The program was centered on three main pillars patriotism, unity and nationhood. The National Youth Policy of 2000 went on to underline the importance of the NYS as a developmental platform for youths.

But according to Wafawarova, the tense political environment in the country in 2000 greatly affected the functioning of the program.

“There were a number of issues that I think prompted people to look at what was happening. The political landscape was that we had the land reform program on one hand and the power of war veterans in that program and their influence in that program … And we had the rise of the opposition.”

He said there were fears of some disconnect between the generation that was rising in the country and the ruling party, Zanu PF.

“To some this disconnect meant a departure from the liberation legacy and its objective, it meant people looking down upon the history of the liberation itself.”

The program which was implemented in 2001, expecting to be a gateway to national economic and social development for young people, took a turn at its implementation stage, stirring controversy over its politicization and alleged violation of rights for recruits.

Wafawarova, who does not shy away from the challenges that plagued the program, said the implementation on paper was simple; create nationalism among Zimbabwe’s youth.

ZIMBABWE - In the Youth Forum, Studio 7’s Tatenda Gumbo speaks with Reason Wafawarova, regarded by many to be the brains behind the controversial National Youth Service (NYS) program launched in 2001. As Wafawarova explains, the National Service Act of 1...
Share via
x
More Information