Zahara will be performing in Zimbabwe on December 5 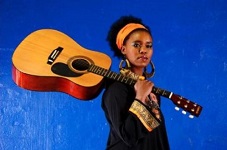 The award-winning singer will be performing at the giant Harare International Conference Centre where she is expected to share stage with Jah Prayzah and Suluman Chimbetu.

The show is being powered by Devine Assignments in partnership with Star FM.

An official from Devine Assignments confirmed the concert running under the banner ‘People’s Awards’.

“Yes we are hosting Zahara, Jah Prayzah and Suluman Chimbetu on December 5 at HICC. We are doing it in partnership with Star FM and the final meeting is on Monday.

“So the details for the show will be released Monday afternoon but what I can say at the moment is that the show is on,” said the official.

“Zahara is known for her sterling performances and she never disappointed whenever she performs in Zimbabwe. Zim has become more of her second home and it’s her first time coming here.

“As of Jah Prayzah and Sulu, no doubt that they are currently on top of the game and are commanding huge crowds at their shows at the moment.”

Zahara will be performing in Zimbabwe on December 5

ZIMBABWE - South African songstress Zahara – real name Bulelwa Mkutukana - is set to perform in Zimbabwe on December 5, H-Metro can reveal. The award-winning singer will be performing at the giant Harare International Conference Centre where she is expec...
Share via
x
More Information