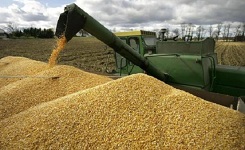 ZIMBABWE – Zambian authorities have imposed an export ban on maize meal, leaving Zimbabwean millers struggling to get about 70 000 tons of already-paid -or maize meal from their northern neighbours, newspaper reported on Monday.

Zambia suspended exporting grain into Zimbabwe, as the country also tried to boost its reserves in light of looming the El Nino induced drought, the report said.

Zimbabwean importers were getting grain from private farmers after the Zambian government stopped exports by the country’s state owned Food Reserve Agency.

An official from the Grain Millers Association of Zimbabwe, Tafadzwa Musarara, said local millers were struggling to get their maize worth $24m after Zambian authorities imposed the ban last week.

“The future [in Zambia] is uncertain because they are also putting an importation programme. So they have suspended exports to Zimbabwe from last week and this has affected some of our members who have made prepayments for about 70 000 tons,” Musarara was quoted saying.

Musarara said the local grain association was negotiating with the Zambian authorities to have the maize released, the report said.

This came after the southern African country experienced a poor harvesting season due to drought.

Zimbabwe needs more than 1.8 million tons of maize to avert the crisis.

ZIMBABWE - Zambian authorities have imposed an export ban on maize meal, leaving Zimbabwean millers struggling to get about 70 000 tons of already-paid -or maize meal from their northern neighbours, newspaper reported on Monday. Zambia suspended exportin...
Share via
x
More Information