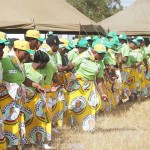 HARARE – Accreditation of provincial delegates for the Zanu-PF 6th National People’s Congress has been marred by irregularities in some provinces, with accusations that some who lead the process are taking on delegates based on factionalism.

Party insiders in Chiredzi, Masvingo, yesterday said that they were not happy with the way the process was being conducted because the accreditation team was openly favouring a faction led by Vice President Joice Mujuru.

A Zanu-PF member who spoke on condition of anonymity from Chiredzi said the accreditation process was hijacked by ousted
provincial chair Retired Brigadier-General Callisto Gwanetsa and some legislators from Chiredzi.

The insider said the accreditation, which was supposed to be done at Chitsanga Hall in Chiredzi, was secretly moved to Triangle by Brig-Gen Gwanetsa and his cabal.

“There are two guys who were seconded by the party from Harare to oversee the accreditation of delegates in Chiredzi and Mwenezi, but to our surprise Brig-Gen Gwanetsa and Colonel Claudius Makova were in charge, directing all operations,” said the source.

“They were being assisted by legislator Danford Masiya. The official accreditation centre was Chitsanga Hall in Chiredzi, but it was moved about 30 kilometres to Triangle under unclear circumstances.” The source said Brig-Gen Gwanetsa was accredited although he was booted out as provincial chair.

“Our understanding is that only provincial and district officials are supposed to be accredited, but we were surprised that Brig-Gen Gwanetsa was accredited although he was booted out,” said the party insider. “It is clear that the process is being handled on factional lines and the leadership should address this mess.”

The part insider said he was not sure why the officials seconded by the party from Harare agreed to change the venue of the accreditation. Acting Masvingo Zanu-PF provincial chairperson Paradza Chakona confirmed the skirmishes in Chiredzi.

“We are going to accredit about 1 152 delegates,” he said. “So, far the process has been smooth except for minor skirmishes in Chiredzi where war veterans had their own views ON who should attend and who should not attend.”
Chakona said the provincial election directorate would receive names of Central Committee members, which would be vetted and submitted to the Politburo.

He said accreditation was complete in Gutu, Mwenezi and Chiredzi districts and would be carried out in Chivi, Zaka, Masvingo and Bikita today. In Mashonaland West, acting chairperson Ziyambi Ziyambi said there were some discrepancies noted during the accreditation and they were writing to Ignatius Chombo as the head of the province’s congress preparation committee on the issue.

“The commissariat department did not do a good job because some deserving delegates were denied accreditation, while those who were not even known within our structures were accredited,” he said. “Can you imagine that they even wanted to deny me accreditation?”

Ziyambi said while the Zanu-PF secretary for commissariat Webster Shamu was not directly involved in the accreditation process, he was ultimately to blame as he was the head of the department. In Bulawayo, acting chairperson George Mlala said the province had completed the accreditation of 336 delegates out of 112 districts and the process was smooth.

“We are done with accreditation and we have said as a province that President Mugabe is the only one to stand for election,” he said. “The rest of the members of the Presidium and Politburo must be appointed by the President.”

Mashonaland East acting chairperson Phineas Chihota said the province is to hold a meeting today to discuss modalities about the congress, including the accreditation of delegates and election of Central Committee members. Party officials in Midlands, Manicaland, Matabeleland South and North and Mashonland Central said the accreditation process was on- going and was expected to be completed by today.

The Zanu-PF 6th National People’s Congress is scheduled for December 2 to 7 under the theme “Accelerated Implementation of Zim-Asset.”

HARARE - Accreditation of provincial delegates for the Zanu-PF 6th National People’s Congress has been marred by irregularities in some provinces, with accusations that some who lead the process are taking on delegates based on factionalism. Party inside...
Share via
x
More Information