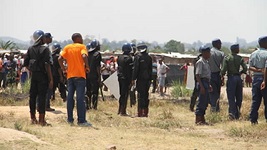 ZIMBABWE – Zanu-PF and MDC-T supporters clashed yesterday in Hopley, Harare South district, leaving a trail of destruction of homesteads and business premises, while scores of people were injured.

Police had to move in to quell the disturbances that occurred in Zone 5 Hopley and lasted for about an hour as it spilled to nearby areas of the suburb.

When The Herald arrived in the area, there was heavy police presence, while some houses had their window panes damaged.

Shops owners closed their doors owing to the tense situation.

Police said the disturbances were triggered by a clash of the venue between the two political parties.
Both parties blamed each other for causing the violence.

Police sources said the MDC-T supporters attacked Zanu-PF supporters after accusing them of invading the venue where they wanted to hold their rally.

“MDC-T supporters attacked Zanu-PF members who were outnumbered,” said a police officer at scene. “After the attack, Zanu-PF retreated and mobilised their members to retaliate, leading to an all out clash between the two parties.”

No arrests had been made, while investigations to establish the circumstances behind the clash were still ongoing.
Zanu-PF Harare province secretary for transport, Cde Anthony Gono, said they were at the venue to verify their structures, a process he said had been ongoing.

“We were due to hold district verification exercise for Simon Mazorodze district,” he said. “We were surprised to notice MDC-T supporters were here saying they wanted to hold a meeting. They went on to attack our supporters.
“We are against political violence, but it is MDC-T that provoked the situation.”

Another Zanu-PF official said the venue which MDC-T wanted to hold its meeting was a private school owned by a Zanu-PF supporter.

Mnangagwa and Grace clash over Tomana

ZIMBABWE - Zanu-PF and MDC-T supporters clashed yesterday in Hopley, Harare South district, leaving a trail of destruction of homesteads and business premises, while scores of people were injured. Police had to move in to quell the disturbances that occurr...
Share via
x
More Information
x