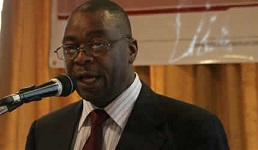 ZIMBABWE – Lands and Rural Resettlement Minister Douglas Mombeshora has warned illegal settlers against invading farms in the name of the ruling party as they will be prosecuted and face the wrath of the law.

The warning comes against the background of clashes at Walescot Farm in Chakari owned by Mr Thomas Mamina where illegal settlers who have no offer letters resisted a court-ordered eviction that resulted in the destruction of property and injuries to them.

Minister Mombeshora said Zanu-PF did not have a policy of invading land already allocated and warned people against abusing the name of the party.

“We are the ruling party and responsible for making policies and we do not have such policies where people choose to settle themselves. The affected farmers should approach police and have the invaders arrested,” he said.

Mr Mamina purchased the farm from its previous owners in 1999.

The illegal settlers allocated themselves pieces of land on Walescot Farm in 2012.

One of the illegal settlers, Mr Siyangaphi Ndibane, said they came to the farm in 2012 without offer letters.

“We came here in 2012 and (Mr) Mamina was at the farm. We were promised offer letters. Mr Mamina is not co-operating with us and this is one of the reasons why we invaded his farm.

“We do not have anywhere to go. The people who destroyed our houses had court orders and were escorted by police who were armed with dogs, teargas and guns. We could not resist as we are powerless,” he said.

Another illegal settler, Mr William Mapokotere, insisted that Mr Mamina was not the real owner of the farm and suspected that he could still be linked to the former white farmer.

“(Mr) Mamina may be used by the former owner to evict us so he comes back and use the farm,” he said.

Mr Mamina dismissed allegations that he was not the bona fide owner of the farm.

He showed The Herald documents confirming he bought the farm in 1999 and was using it under the name Quiddity (Private) Limited.

“This is my farm and I have title deeds. I have been having problems with these people since 2012. I was given a court order to evict them long back. Their stay on my farm has affected operations and I have been forced to cut the number of my cattle from 300 to 15 since I no longer have grazing area.

“How long can I continue suffering at the hands of these people? They harass my workers and now the children from my farm can no longer use the road that passes through the settlement for fear of harassment,” he said.

Mr Mamina said he was not the only indigenous farmer whose farm had been invaded. His neighbours, Mr Kenneth Zimbora of Rondor South Farm and Mr Joseph Mandiya of Delcia, had their farms invaded as well.

Mr Zimbora said they are always in the courts with the settlers who threaten to behead them.

“This has affected progress at the farms. Some of the settlers are from Gokwe, Masvingo and Gutu and are not from this area,” he said.

The farm owners complained that they were no longer able to pay their workers as production had declined.

“We have reduced our workforce as we cannot fully utilise our farms.”

ZIMBABWE - Lands and Rural Resettlement Minister Douglas Mombeshora has warned illegal settlers against invading farms in the name of the ruling party as they will be prosecuted and face the wrath of the law. The warning comes against the background of cla...
Share via
x
More Information