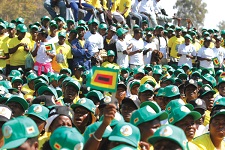 Speaking during a tense provincial co-ordinating committee meeting at the Chiefs’ Hall called in the wake of the alleged suspension of Cde Chadzamira as Masvingo provincial chairman, senior Zanu-PF officials took umbrage with remarks by Vice President Phelekezela Mphoko at a rally in Chiweshe last Friday where he scoffed at the likelihood of a Karanga presidency in the country, saying Zimbabwe was united under the able leadership of President Mugabe.

Zanu-PF deputy secretary for security in the Politburo Cde Lovemore Matuke said it was shocking that some senior national leaders wanted to divide people of Zimbabwe along tribal lines.

‘’Unlike some of you, I was at one time suspended from my position as chair of Zanu-PF in Masvingo for standing by the truth and I am prepared to be suspended again for standing for the truth because there are some people who want to act as if they own the President yet we are all fully behind him as our leader in Zanu-PF,’’ he said.

‘’It is disturbing that we have some of our leaders who are openly trying to stoke tribal tensions saying such and such a tribe will not do this or that. We feel such assertions are misguided because never has it happened in the history of our country that we have divided ourselves on tribal grounds. We are just one nation, one people who are united behind the able leadership of President Mugabe,’’ Cde Matuke added.

His sentiments were echoed by Zanu-PF deputy secretary for legal affairs in the Politburo Cde Paul Mangwana who said he was also prepared to be expelled from the party for standing by the truth.

Cde Mangwana said it was reckless for senior national leaders to parrot tribal politics in Zimbabwe almost 36 years after independence.

Turning to the alleged suspension of Cde Chadzamira, Cde Mangwana said the entire Zanu-PF Masvingo provincial co-ordinating committee was behind the chairman and accused members of the so-called G40 faction of trying to destabilise and eventually destroy Zanu-PF from within.

Cde Chadzamira came out with guns blazing on Monday declaring his suspension as null and void and maintaining that he was still the Zanu-PF chairman for Masvingo province.

He said that his suspension was unconstitutional adding that it was a nullity because the entire Masvingo provincial executive was solidly behind him and the leadership of President Mugabe.

He added that the purported suspension of Cde Chadzamira by Cde Kasukuwere was aimed at disrupting preparations for the forthcoming 21st February Movement celebrations to be held at the Great Zimbabwe Hotel on February 27.

Cde Matuke also reiterated that Cde Chadzamira’s suspension was inspired by the desire to disrupt preparations for Masvingo to host President Mugabe’s birthday.

‘’There is a hidden agenda behind all these suspensions especially coming at a time when Masvingo was preparing for the mother of all birthday celebrations for our President,’’ he said.

War veterans Masvingo provincial vice chairman Cde Ignatious Murindi said freedom fighters in Masvingo were fully behind President Mugabe and Cde Chadzamira warning that there were some elements bent on destabilising Zanu-PF from within.

There was an electric atmosphere at the meeting as all the provincial executive members belted liberation war songs led by Cde Chadzamira.