Coltart told the Daily News yesterday that President Mugabe must apologise as Zimbabweans were a forgiving people.

His sentiments torched a storm among those who fought for the country’s liberation.
Zanu-PF national spokesperson Cde Simon Khaya- Moyo said Coltart could be suffering from memory loss as President Mugabe had spoken about the issue in the past.

“He (President Mugabe) has made his statement very clear that it was a moment of madness. What more does he want him to do? I don’t understand what he’s speaking about. The President doesn’t have to talk about it. Doesn’t he read English? If so we can provide him with vernacular books maybe he can understand,” said Cde Khaya-Moyo.

Cde Mlala said Coltart was a policeman before independence and was deployed in its anti-terrorism section that was responsible for the indescribable massacres of thousands of blacks.

He said so brutal was Coltart’s unit that it could rip open pregnant women’s bellies just to instil fear among blacks so that they do not support the liberation war.

Cde Mlala said it was an insult to the country to have people like Coltart making noise in matters that do not concern them just to remain politically relevant.

He said Coltart pretends to forget yet he should be the one apologising for the untold suffering that he personally, the unit he worked for and the Rhodesian regime he loyally served, caused to thousands of Zimbabweans.

“We don’t expect this from a man like him, a lawyer, and a historian to be forgetting this quickly. I find it confusing that it’s 35 years but he has forgotten. I witnessed some of these things. I saw people being massacred. I’m a war veteran. People were being killed for supporting us, they were even killed for giving us food or identifying our footprints,” said Cde Mlala.

Acting President Phelekezela Mphoko recently explained that the disturbances that happened in Matabeleland region and Midlands were a Western engineered conspiracy.
He said Zimbabweans were being misinformed on the Gukurahundi narrative to blame their leaders.

“Information we have is that the Americans, the British, the South Africans and Rhodesians … (decided) ‘we need to find a solution to contain the situation’. So they came up with a … buffer zone in Mozambique and Angola to stop ANC from both sides; to stop ANC and the Patriotic Front forces on this side. They created — in Mozambique — Renamo, which was heavily supported by South African military intelligence. And they created Unita in Angola,” he said.

“Come Zimbabwe becomes independent: South Africans get the same threat now. Zimbabwe is independent; the front is open. So what do they do? They create — from a myth, from nothing: ‘Ah, Zapu wants to overthrow you (the Zanu Government)’. (This was) in order to justify, to create something. So that’s what happened. So the Gukurahundi after the war had nothing to do with (President) Mugabe — nothing! That’s a fact. People can say what they want, but that was a Western conspiracy.” 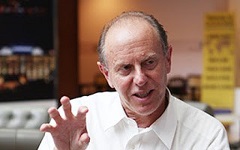