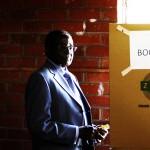 Scores of the Zanu PF youth league from Harare province attended a youth league provincial conference held in the capital.

Speaking to the ZBC News, the national secretary for youth affairs and politburo member Cde Pupurai Togarepi took a swipe at the MDC youths who allegedly attacked the police and described the act as barbaric and uncivilised.

“The recent attack on the police by the MDC youths is inhuman and barbaric,” Cde Togarepi said.

Meanwhile, the Zanu PF inter-district conference for Harare province that was slated for Saturday the 14thof November at Girls High School has been cancelled until further notice.