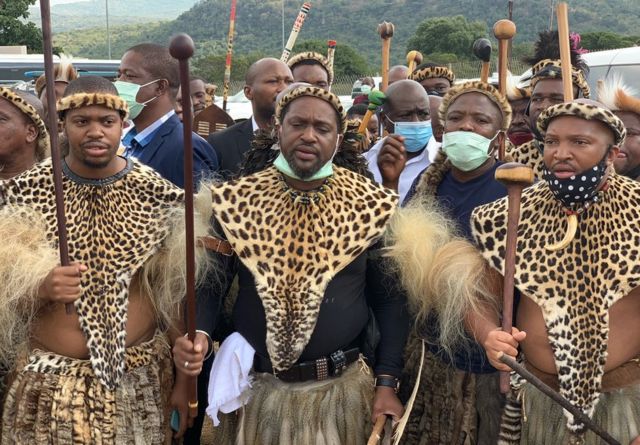 Unveiled last Friday, Misuzulu, 46, was named in the will of Zulu Queen Mantfombi Dlamini-Zulu – his mother – who also died unexpectedly late last month.

However, some family members openly voiced disapproval on Friday and the prince had to be led away by armed security.

On Saturday, the family held a press conference to say the new king had their support.

“Zimbabwe African People’s Union – ZAPU would like to congratulate Prince Misuzulu kaZwelithini and the Royal Zulu Kingdom on the occasion of naming the new King of the Zulu Nation, King Misuzulu Zulu kaZwelithini,” said ZAPU president, Isaac Mabuka in a statement.

“The mother party appreciates the hard and difficult time following the tragic events involving the late King and most recently the Regent Queen of the Royal Kingdom. Long live the legacy of King Goodwill Zwelithini and may the Regent Queen rest in peace.”

Mabuka commend the Zulu Nation for the way it handled the transition process.

“We are however impressed by as well as commend the Zulu Nation for the nature of handling the transitional period and process that has led to the naming of the heir to the throne,” he said.

“Most commendable is the unwavering and religious commitment to the people’s traditions even when all odds were stacked against the Zulu nation. This has been both educative and instructive to all of us as Africans to not only retrace our traditional footsteps but to respect and preserve them in order for the African child to regain his dignified identity and place in the global society.”

The Zulu throne does not have formal political power and the monarch’s role within broader South African society is largely ceremonial although remaining hugely influential, and having a yearly taxpayer-funded budget of more than US$4.9m.