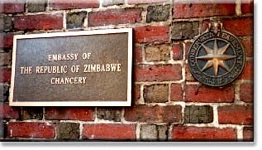 ZIMBABWE – The Parliamentary Portfolio Committee on Foreign Affairs has recommended that Zimbabwe cuts down on the number of its foreign missions to avoid the embarrassment of failure to maintain them.

The committee’s recent report on the 2016 budget allocations to the ministry said Zimbabwe’s embassies were this year likely to face even more embarrassment due to budgetary constraints.

It said government could fail to pay diplomats, procure vehicles, pay rentals, as well as finance essential repair work at its embassies around the globe.

The Foreign Affairs ministry was allocated $36,9 million in the 2016 budget, but the committee said this was not adequate to meet requirements and to keep Zimbabwe’s image respectable.

“Government must come up with a list of key partner countries and rationalise on the number of embassies that the country can sustain under the current economic conditions,” reads the committee’s report.

“This will help to achieve the country’s objective of attracting and retaining foreign direct investment.

“The ministry will then cultivate and foster diplomatic and economic relations through its network of missions that could open economic opportunities to Zimbabwe.”

The committee said standards at Zimbabwe’s 43 foreign missions had gone down due to successive years of inadequate funding.

“We would be grateful if the Finance minister could revise upwards the allocation for the ministry which is the face of Zimbabwe, in order to function with some semblance of normalcy and to avoid country embarrassment when it fails to meet its obligations at our diplomatic missions.”

The report said the Foreign Affairs ministry’s movable and immovable assets at head office and at missions abroad had over the years suffered neglect due to inadequate funding.

“The vehicle fleet at most missions is old and needs urgent replacement,” the MPs said.

” The committee notes that the allocation does not address some of the priority needs of the ministry.

“Since the ministry is the face of Zimbabwe, the country risks reputational damage and if this is not addressed, it will result in the assets under the ministry deteriorating beyond repair, which would be more costly to fix in the long run.”

In 2015, secretary in the Finance ministry Willard Manungo made startling revelations about the dire state of Zimbabwe’s foreign missions.

Committee chairperson Reuben Marumahoko said when he visited Malawi on government business in 2015, the situation there was pathetic to the extent they failed to offer him transport and he had to use public transport to go to different meetings.

Foreign Affairs secretary Joey Bimha also painted the same gloomy picture when he appeared before the committee, telling MPs that the situation at Zimbabwe’s foreign missions was a reflection of the country’s dire economic challenges.

ZIMBABWE - The Parliamentary Portfolio Committee on Foreign Affairs has recommended that Zimbabwe cuts down on the number of its foreign missions to avoid the embarrassment of failure to maintain them. The committee's recent report on the 2016 budget allo...
Share via
x
More Information