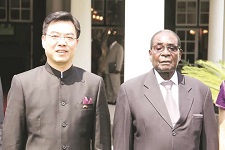 ZIMBABWE – Over 10 000 Chinese nationals are living and doing business in Zimbabwe, a development Chinese Ambassador to Zimbabwe Mr Huang Ping says will promote economic integration between the two countries.

“As we all know, China and Zimbabwe are all-weather friends and have shared weal and woe throughout the years,” he said.

“Now, around 10 000 Chinese people are living and doing business in Zimbabwe, contributing all they can to the development of Zimbabwe and the welfare of its people.”

“What I have learned during these trips showed that Chinese companies provide a major boost to the local economy wherever they are by creating local employment, building local schools, orphanages, setting up scholarships and helping Zimbabweans to fulfil their dreams,” he said.

Ambassador Huang said Chinese people were not in the country to loot local resources, but to advance local talent.

“I have found out that in most of the Chinese companies, the percentage of local employees is very high. Anhui Foreign Economic Construction has over 4 000 local employees. Nantong Construction and Engineering has 35 Chinese and about 700 locals,” he said.

“There is a team of Chinese doctors, providing free professional medical services on various occasions for the locals,” he said.

“A group of agricultural experts is also working side by side with Zimbabwean farmers, sharing their knowledge in farms and teaching locals to use the equipment provided by China in the Agriculture Demonstration Centres.”

To promote cultural integration and understanding between Zimbabwe and China, Ambassador Huang said a number of young volunteer teachers were teaching Chinese language and culture at the famous Confucius Institute and various schools in major cities every year.

He said partnerships between Chinese corporations and the country’s national parks would curb the rising cases of poaching.

“There is another volunteer team named ‘Blue-Sky’, risking their lives taking part in frontline combat against illegal poaching in national parks like Matusadona and Mana-Pools,” said Ambassador Huang.

“There is a foundation set up by a Chinese business lady named Sino-Zimbabwe Wildlife Foundation” last year, which has since received over $700 000 worth of cash and wildlife protection equipment donated by Chinese nationals and is in close co-operation with the Zimbabwean Ministry of Environment.”

Ambassador Huang said: “Apart from various business communities like the Chinese Federation and Chinese Business Association and through the official channels, our embassy has done a lot together with the Zimbabwean Government to enhance practical bilateral co-operation in all areas.”

ZIMBABWE - Over 10 000 Chinese nationals are living and doing business in Zimbabwe, a development Chinese Ambassador to Zimbabwe Mr Huang Ping says will promote economic integration between the two countries. Addressing delegates at the Chinese New Year re...
Share via
x
More Information
x