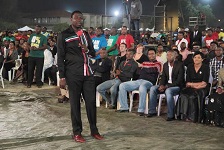 ZIMBABWE – At least two Zimbabwean Cabinet ministers and MPs from across the political divide were in South Africa for Walter Magaya’s Prophetic, Healing and Deliverance (PHD) ministries’ four-day international crusade which ended in Pretoria yesterday.

The ministers were part of a 50 000-strong crowd attending the crusade which ran under the theme With God All Things Are Possible.

In his closing message, Magaya bemoaned the high crime rate in South Africa saying the vice had robbed the country of its future.

“South Africa needs God . . . if you were to look at our economic situation as Zimbabwe we are far below South Africa, but we have less crime than here . . . it is because there is peace in our country, ” he said.

The crusade was also attended by Zimbabwe’s ambassador to South Africa Isaac Moyo who said Magaya was positioning the country’s image among the top Christian states in the world and luring investors through his church.

“When people come together through prayer, it helps us to engage on business fronts. Gospel helps break the barriers between the two states,” Moyo said.

“Magaya is doing what we call religious tourism — positioning the country’s image and showcasing what as a country we can do.

“As a country we have showcased our skills and talent in sport and now Magaya is showcasing what we can do as a country spiritually.”

ZIMBABWE - At least two Zimbabwean Cabinet ministers and MPs from across the political divide were in South Africa for Walter Magaya’s Prophetic, Healing and Deliverance (PHD) ministries’ four-day international crusade which ended in Pretoria yesterday...
Share via
x
More Information