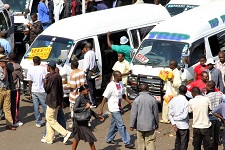 ZIMBABWE – The Zimbabwe Republic Police has launched a blitz to get rid of all the pirate taxis off the Central Business District as this scourge had remained unsolved for years.

Popularly known as ‘Mushikashika’, under the blitz, 100 vehicles have so far been impounded since its launch on Monday.

Addressing journalists on Wednesday at Chikurubi Support Unit where the vehicles are being held, National Police Spokesperson, Senior Assistant Commission Charity Charamba said this was a serious operation as they meant to restore order in the CBD.

“We mean business this time and by the end of this year, you will not find any of these Mushikashika vehicles in the CBD. This is not just a crackdown that is being done in Harare but across all provinces but Harare has been the worst culprit.

“As you can see we have impounded 100 vehicles and its going to be a cumbersome process to claim these vehicles back. To get them, one will have to produce all the papers and we will first investigate if the vehicle was not used to commit any crime before it is released,” she said.

In a random search that was conducted in the presence of journalists through the Central Vehicle Registry (CVR), most of the impounded vehicles were found not to be registered or having fake number plates.

“As you have witnessed, most of these vehicles are not registered and we suspect these might have also been used in a spate of robberies that were committed. Such vehicles will not be released.

“We really mean business this time because the blame has always been on the police when ever these vehicles cause accidents as they try to evade police. We want to clear the city and by the end of the year you will not find any of these,” she added.

Snr Ass Comm Charamba said vehicles like Toyota Funcargo, Honda Fit, Toyota Vitz, Toyota Raum and Ipsum were the most commonly used as illegal taxis and had caused a lot of accidents as most of them were deplorable.

“Imagine that Honda Fit where eight people were killed along the Masvingo-Zvishavane highway, how such a small vehicle can have eight people on board and two bags of fertiliser.

“Most of the vehicles are deplorable and are in a terrible state. Look at the tyres of most of these vehicles, some are not even the proper sizes are we cannot continue to wait while commuters are killed.

“We have just decided to act and get rid of all these Mushikashikas. Those that want to use their vehicles to transport people should then register them as taxis,” she said.

As part of the blitz, commuter omnibuses that pick commuters and undesignated points have since been impounded and most of them have fake number plates.

“These are the same vehicles that do not stop at police road blocks and if you try to track them you won’t find anything because they are not registered or have fake number plates.

“This tendency of drivers replacing the genuine number plates with fake ones has to stop and I hope this blitz will send the right message to the people”.

She also called the commuters to also stop using these pirate taxis as they will also be putting their lives at risk.

“We need the support of the public for this crack down to succeed. If a vehicle is not registered and you are involved in an accident, just know that you will not be compensated,” she argued.

The blitz could have started to bear fruits if the snap survey in the CBD on Wednesday is anything to go by as there seemed to be sanity at corner Jason and Fourth Street which had become home for the pirate taxis.

No, Zimbabwe Is Not the World’s Second Poorest Country

ZIMBABWE - The Zimbabwe Republic Police has launched a blitz to get rid of all the pirate taxis off the Central Business District as this scourge had remained unsolved for years. Popularly known as ‘Mushikashika’, under the blitz, 100 vehicles have so ...
Share via
x
More Information
x