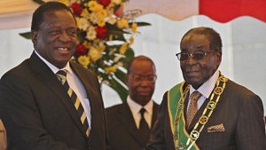 Zimbabwe – Zimbabwe President Robert Mugabe’s spokesman declined to comment on Wednesday on rumours that the 91-year-old leader had suffered a heart attack, saying a response to the latest speculation about his health was “unnecessary”.

Spokesman George Charamba’s response was to a text message sent by Reuters asking for an update on Mugabe’s health.

A letter was published on Tuesday by an anonymous author saying Mugabe was “reported to have collapsed after suffering a heart attack while on holiday with his family”.

The letter, which did not reveal the source of its information, added that Mugabe was in a critical condition and that his family had been told to expect the worst.

It did not say where he had suffered the heart attack or where he was being treated.

Reports about the declining health of Mugabe, the only leader Zimbabwe has known since independence in 1980, are relatively common and Charamba normally declines to give an official response.

Mugabe likes to describe himself as “fit as a fiddle” but has shown signs of his advancing age in the last few years. He was caught on camera in 2015 tripping and falling down a short flight of stairs at Harare airport.

First vice-president Emmerson Mnangagwa, a powerful former security chief and for decades one of Mugabe’s closest aides, stands in line to succeed Mugabe in the event of his death.

Zimbabwe - Zimbabwe President Robert Mugabe’s spokesman declined to comment on Wednesday on rumours that the 91-year-old leader had suffered a heart attack, saying a response to the latest speculation about his health was “unnecessary”. Spokesman Geo...
Share via
x
More Information