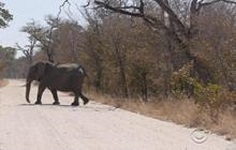 ZIMBABWE – HARARE – Cyanide poisoning has killed 22 elephants in Zimbabwe’s Hwange National Park, the Zimbabwe National Parks and Wildlife Management Authority said on Monday. This brings to 62 the number of elephants poisoned by poachers in this southern Africa country in October.

Rangers found the carcasses of the elephants in Hwange park’s Sinamatella area on Monday morning, national parks spokeswoman Caroline Washaya-Moyo told The Associated Press. “Again, it is cyanide poisoning,” said Washaya-Moyo, who said the poachers got away with three ivory tusks.

“We are now trying to check how many elephants had fully developed tusks because babies are among those killed,” she said. “The rate at which we are losing animals to cyanide is alarming. Many other species are also dying from the cyanide used by poachers to target elephants. We are appealing to people in communities close to national parks to cooperate with authorities.” In early October, the parks reported three incidents in which 40 elephants were killed by cyanide poisoning. Three were killed in the Kariba area of cyanide put in oranges. The rest were killed in Hwange park. In 2013, more than 200 elephants died from cyanide poisoning in Hwange. Washaya-Moyo said the parks agency is hoping that trained dogs from South Africa and the deployment of drones will help tighten monitoring of the vast park in the west of this wildlife-rich country. On Monday, the national parks also announced that over the weekend authorities at Harare International Airport seized 173 kilograms (380 pounds) of ivory worth $43,250 that was about to be smuggled to Singapore. Three Zimbabweans and a Malian national were arrested over the smuggling bid, the parks agency said in a statement.

ZIMBABWE - HARARE - Cyanide poisoning has killed 22 elephants in Zimbabwe's Hwange National Park, the Zimbabwe National Parks and Wildlife Management Authority said on Monday. This brings to 62 the number of elephants poisoned by poachers in this southe...
Share via
x
More Information
x