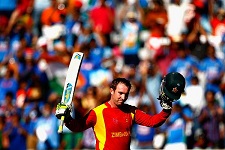 ZIMBABWE – There’s something about Afghanistan doing well in international cricket. Afghanitan travelled to Zimbabwe for a five-match ODI series and at one stage were 2-1 down in the series. The visitors registered a come-from-behind win and sealed the series 3-2. In December, at the time of this being writter, Afghanistan piled on the misery on Zimbabwe in the United Arab Emirates and were leading the five-match ODI series 2-0.

It was a contest befitting of a final. Both Ireland and Bangladesh had already sealed their spot in the ICC Women’s WT20 2016, they played a thrilling contest where Ireland won on the last ball with two wickets in hand to lift the trophy.

In what turned out to be a dismal year for Zimbabwe, Sean Williams shone bright for them. The all-rounder picked up 24 wickets to go with his 1139 runs at an average of 36.74. He scored 102 against Afghanistan in Bulawayo but couldn’t prevent his team losing from 73 runs.

Shaiman Anwar had a dream run in 2015 and emerged as the highest run-getter for the United Arab Emirates. He averaged 47.58 and scored more than 300 runs from the second best batsman for his country – Swapnil Patil. Anwar’s moment under the sun came in the 2015 World Cup when he scored a 83-ball 106 against Ireland, his maiden ODI century, but Ireland managed to steal a two-wicket win. However, he failed to come up with something special in the ICC World T20 qualifier and that was one of the reasons UAE crashed out of the tournament.

Prosper Utseya shook the cricket world when he laid racism allegations against Alastair Campbell. However, he failed to walk the talk in the limited opportunities he got. Utseya played ten matches across formats and scored just 49 runs and was able to bag just five wickets. He was reported for suspect bowling action.

With suggestions cropping up every now and then that the World Cup in 2019 should be reduced to a ten-team event, the Associate and Affiliate nations have done really well to show that they belong to the biggest stage. However, 2016 holds a lot of promise and the likes of Ireland, Scotland, Netherland and Oman need to build on what they’ve achieved in the last one year. The ICC World T20 gives them a very good opportunity. For Zimbabwe, things look bleak. A lot of work needs to be done both on and off the field for things to improve.

Zimbabwe, associate and affiliate nations in 2015 – A year in review

ZIMBABWE - There's something about Afghanistan doing well in international cricket. Afghanitan travelled to Zimbabwe for a five-match ODI series and at one stage were 2-1 down in the series. The visitors registered a come-from-behind win and sealed the se...
Share via
x
More Information
x