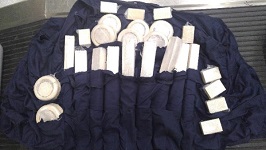 ZIMBABWE – A senior ecologist and two game rangers employed by the Parks and Wildlife Management Authority in Hwange National Park have been arrested in connection with a foiled bid to smuggle at least eight elephant tusks to an unspecified destination via Harare International Airport.

At a press conference in Harare earlier this week, parks authority spokeswoman Caroline-Washaya Moyo said that senior ecologist Edwin Makuwe and game rangers Pedzisai Nyoni and John Masimba will soon appear in court on charges of stealing and attempting to smuggle the ivory.

The tusks have been identified as part of a large haul stolen last year from the authority’s warehouse in Hwange.

Police detectives from the Precious Commodities and Minerals Unit of the Border Control Division arrested the three men on October 7 at the Hwange Safari Lodge Main Camp.

The arrest followed the seizure the day before of eight elephant tusks as they were being loaded onto an Air Zimbabwe plane. The destination of the flight has not been revealed.

“The offense was discovered during X-ray scanning [of the cargo],” Washaya-Moyo said. “The Authority wants to ensure that poaching and illegal smuggling of wildlife and wildlife products is under control.”

She declined to give further details, saying that doing so could jeopardize ongoing investigations.

A parks ranger, who requested anonymity, said the tusks were traced back to Hwange after the police found a falsified ivory export permit representing the parks authority, which he had unwittingly signed.

Examination of serial numbers on the tusks showed that they were part of the large ivory haul from the stockpile in a warehouse in Hwange late last year.

The warehouse is the regional holding center for all tusks and rhino horns recovered in Hwange and surrounding conservancies from poachers, the culling of herds, and deaths from natural causes.

“We believe we’re on the verge of resolving the warehouse heist in which hundreds of elephant and rhino tusks were stolen last year,” the ranger said.

“We’ve always suspected that the burglary was an inside job. So orders have been given from the top to ensure that this matter be pursued thoroughly to ensure that those involved face justice.”

He said the investigation now has an international dimension. Police in Zimbabwe are working with INTERPOL to identify the individual (or syndicate) who intended to buy the stolen ivory from the Hwange three.

A separate investigation that seeks to determine if the three are connected to the recent killing of 111 elephants in Hwange by cyabide poisoning is also under way.

Meanwhile, on October 7, Oppah Muchinguri, Zimbabwe’s minister of environment, water and climate, summed up anti-poaching efforts in the country.

To date this year, she said, at least 22 poachers, 16 of them Zimbabwe nationals and the rest foreigners, have been killed. “At least 876 locals involved in poaching have been arrested, and 44 foreigners were apprehended,” Muchinguri said. “We are moving to embrace the use of technology like drones and aircraft to combat poaching.”

Muchinguri also said that five men have been arrested in connection with the cyanide poisonings in Hwange but gave no further details.

ZIMBABWE - A senior ecologist and two game rangers employed by the Parks and Wildlife Management Authority in Hwange National Park have been arrested in connection with a foiled bid to smuggle at least eight elephant tusks to an unspecified destination vi...
Share via
x
More Information