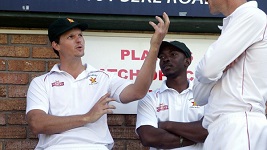 The 36-year-old, who has played nine Tests and 43 one-day internationals, made the remarks in July in response to an article posted on Facebook about national team player Prosper Utseya’s letter to Zimbabwe Cricket alleging racism.

The comments, in which Vermeulen used a derogatory term to refer to black Zimbabweans, were deleted soon after he made them but a screenshot of the post was later circulated.

“Zimbabwe Cricket has with immediate effect banned Mark Vermeulen from participating in all cricket activities, after he owned up to repulsive remarks that reflect racism, prejudice and plain ignorance,” the board said in a statement.

“We find Vermeulen’s Facebook comment distasteful and unacceptable, particularly for a senior sportsman who should have learnt from playing in Zimbabwe and abroad that there is no place for racism in sport, more so on the field of play where one may have team mates and therefore colleagues of different races.”

Vermeulen’s past has been chequered with disciplinary and behaviour issues.

He admitted to burning down Zimbabwe’s cricket academy in 2006 but was acquitted on the grounds of mental illness.

He was also banned by the England and Wales Cricket Board in 2006 from playing cricket in the country after an altercation with a spectator at a Central Lancashire League club match.

Vermeulen retired from all forms of cricket in 2011 in the hope of forging a career in golf but within a year was back playing on the Zimbabwe domestic scene.

He made his return to Test cricket after a decade in the wilderness in a one-off match against South Africa at Harare in August 2014, the last time he played for Zimbabwe.

“I apologised to Prosper personally about the issue and he accepted my apology,” he said. “I know my comments were over the top and I apologise to all that I have offended. But as a cricketer, it’s how our minds work.

“It was not meant in a menacing way. It was just a chirp that often happens out on the field of play and as men, you take the blow on the chin and get on with the game.”

ZIMBABWE - Zimbabwe have banned batsman Mark Vermeulen from all cricket activities for what the board described as 'repulsive remarks that reflect racism, prejudice and plain ignorance'.The 36-year-old, who has played nine Tests and 43 one-day internatio...
Share via
x
More Information