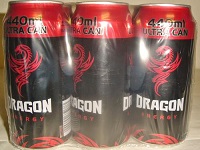 ZIMBABWE – The Ministry of Health and Child Care in Zimbabwe has banned Dragon Energy Drink saying it violates import procedures and does not meet the required health standards of beverages in the country.

The ban was announced by the Permanent Secretary in the Ministry, Brigadier-General Dr Gerald Gwinji in letters to all provincial medical directors in the country, dated 28 September 2015. Environmental health officers have been dispatched and instructed to remove all Dragon Energy Drinks found in any retail shops.

Part of the communication from the Permanent Secretary reads: “Analysis results of the energy drink have shown that: The drink is violating S.I. 265 of 2002; i) Section 5 (1) (e) The artificial flavourings contained therein are not declared by names on the list of ingredients. The label bears the claims ‘‘THE POWER IS YOURS’’ and specifically designed to maximise ‘‘mental and physical performance’’ which cannot be substantiated.

The letter further notes that the energy drink violates regulation 181 of 1977 Section 4 (7) in that the vitamins (niacin, B5, B6 and B12) on the list of ingredients imply that fortification ingredients were added without written permission from the Secretary for Health and Child Care.

Furthermore, the Health Ministry said proper import procedures were not followed before the energy drink was imported into the country.

“Basing on the above facts, may all the Dragon Energy Drink 500ml ultra cans be withdrawn from the shelves until proper import procedures and above violations are addressed,” said Brig-Gen Dr Gwinji.

In April this year, the Health Minister, Dr David Parirenyatwa, said South Africa was making Zimbabwe a dumping ground for cheap and potentially dangerous energy drinks. Dr Parirenyatwa was reacting to reports that although there was an influx of Dragon Energy Drink throughout the country, people were not sure of its safety.

“Zimbabwe is not a dumping ground for these cheap energy drinks. We should not allow them to send their products here that are not healthy for our people. We must protect our people. We need to seriously follow it up,” he was quoted saying.

According to health experts, what is worrisome is the high concentration of caffeine that Dragon has. Caffeine is a crystalline compound that is found especially in tea and coffee plants and is a stimulant of the central nervous system. It increases wakefulness, alleviates fatigue and improves concentration and focus.

Online research states that people like the kick from the stimulants in energy drinks, and are drawn to the enticing claims like “provide you a quick lift”, “gives you more energy”, and “improved performance and concentration”, that are inscribed on the energy drinks with little idea about negative side effects.

Association for Dietetics in South Africa president Mr Berna Harmse was quoted in the media saying energy drinks have a high caffeine content, which increases blood pressure and heart rate. He said they differ from sports drinks as the ingredients in energy drinks have raised concerns about toxicity and potentially serious adverse effects.

The large dose of caffeine and concentrated amount of sugar slows down the body’s ability to absorb water. Also, when energy drinks are mixed with alcohol, they pose potential health dangers such as elevation of blood pressure and even a heart attack.

Many people in Zimbabwe and beyond take energy drinks while driving long distances so as to prevent them from sleeping on the wheel. The 500ml energy drink which comes in two variations, Dragon Red and Green, is selling for $1.

“This is symptomatic of the poverty levels in the country; consumers are more concerned about the price than anything else so the cheaper the product, the more people buy it.

“Just like the chickens that had flooded the market from Brazil, they were very cheap and people would buy them because of that putting aside the potential dangers to their health as they were genetically modified,” he said.

Mr Gundani lamented that Zimbabweans did not value their own products as they have low self esteem.

“Zimbabweans value foreign products, however, inferior, as long as it is foreign they buy. Another worrying thing is that they never look at the nutritional value of some of these cheap products they buy,” he said.

Mr Gundani said the level of apathy towards locally produced goods was worrying. He said another challenge was that of border controls which he said were rather porous. He said many cheap quality goods find their way through without being adequately vetted for their safety.

Look what you have done, Cde Chris!

ZIMBABWE - The Ministry of Health and Child Care in Zimbabwe has banned Dragon Energy Drink saying it violates import procedures and does not meet the required health standards of beverages in the country. The ban was announced by the Permanent Secretary i...
Share via
x
More Information
x