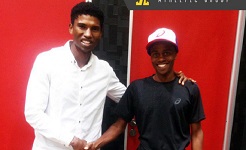 ZIMBABWE – South Africa based Zimbabwean middle and long-distance runner Givemore Mudzinganyama has landed himself two lucrative sponsorship deals with a top sports goods manufacturing company and a nutritional firm in that country. According to Mudzinganyama’s manager, Fungai Matiza, the 27-year-old athlete recently got sponsorship deals with Asics and Cadence Nutrition in South Africa and he was now looking at competing in the European road running circuit.

Matiza, a former sprinter here in Zimbabwe, is now into sports management in South Africa where he looks after the affairs of several Zimbabwean athletes who are based there and was instrumental in getting the two sponsorship deals for Mudzinganyama.

In fact, Matiza now owns a sports management company — Triumph Athletic Group — which is based in Johannesburg and he is also a career management advisor.

“As you know we have been on a mission to uplift African talent in sport and being Zimbabwean, my countrymen have always (been) closest to my heart. And one of our own talented Zimbabwean athletes, Givemore Mudzinganyama, has been doing big things in South Africa and recently got sponsorship deal with Asics and Cadence Nutrition.

“As for the Asics (sponsorship deal), he is on a year-to-year sponsorship in which he will receive some sportswear, casual wear and racing gear while Cadence Nutrition will supply him with a range of nutritional supplements for his races.

“Now we are moving to the next phase and looking to embark on a European tour to make a name for the athletes and try to get good world rankings for him,” said Matiza from his base in Johannesburg yesterday.

He added that Mudzinganyama was scheduled to fly Cape Town from Johannesburg yesterday for a photo shoot with his new sponsors.

A former Churchill School pupil in Harare, Mudzinganyama is among a number of top Zimbabwean male and female middle and long-distance runners who are now based in South Africa where he has won a number of road races including the 10 km race at the Birchwood Half-marathon event in Johannesburg. He has personal best times of 29 minutes 26 seconds in the 10km race and one hour five minutes and 29 seconds in the half-marathon which were set on October 12, 2014 in Cape Town and September 26, 2015 in Mossel Bay respectively.

Before he decided to set his base in South Africa, Mudzinganyama competed in a number of road races in Zimbabwe, including the ZITF Coca Cola Four Minute Mile in Bulawayo.

But it is in South Africa where he is slowly making a name for himself by winning or finishing in the top 10 of several road races there and these include the Umzimkhulu 21,1 Spar Corridor Half-marathon in Durban where he at one stage ran his personal best in that distance in a time of 1:04:12.

He also competed in the Johnson Crane 10,5 kilometre race in Johannesburg, among a host of top road races in South Africa.

And Mudzinganyama’s manager, Matiza, now wants his athlete to follow the footsteps of former top Zimbabwean middle and long-distance runners such as the late Stanley Mandebele and Tendai Chimusasa by setting up a base for him in Europe.

In fact, Matiza was once based in Germany while he was still active on the track before he hung up his spikes to concentrate on sports management business and he is now looking at using his connections in the European country to help turn Mudzinganyama into an internationally-recognised road runner in-the-not-too-distance future.

“Givemore has been consulting with me for over a year now as his career guidance advisor, our goal is to move from regional competitions and grow his portfolio on an international level. I am working in collaboration with international agents to make sure that our athletes are placed in good races where they can at least earn a decent living as they have committed to being professional athletes.

“At the moment Givemore has semi-confirmed races in Germany and an invitation to run in the Singapore Open later this year,” Matiza said.

Massive Boost For Warriors As Musona Returns To Action

ZIMBABWE - South Africa based Zimbabwean middle and long-distance runner Givemore Mudzinganyama has landed himself two lucrative sponsorship deals with a top sports goods manufacturing company and a nutritional firm in that country. According to Mudzingany...
Share via
x
More Information
x