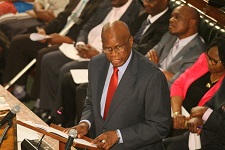 ZIMBABWE – Security ministries received some of the biggest allocations in the 2016 budget votes outside the Education ministries despite a marked shift in social spending, statistics show.

According to the figures, Treasury allocated a quarter of the of the US$4 billion budget to the two Education ministries, followed by security ministries — Home Affairs and Defence — starving the health ministry of critical funding.

“As I have previously indicated, the social sector ministries of Primary and Secondary Education, Health and Child Care and Public Service, Labour and Social Welfare were identified as the lead ministries in the implementation of programme-based budgeting,” Finance minister Patrick Chinamasa said in his budget speech.

“This was in recognition of the immediate need to improve on both the coverage and quality of social services, as well as strategically allocating our limited public resources to those service delivery programmes which are of greatest benefit to the community.”

The Ministry of Primary and Secondary Education received the biggest share of the budget at US$810 million, while the Ministry of Higher and Tertiary education was allocated US$307 million, followed by Home Affairs (US$396 million), Defence (US$358 million) and Health (US$331million).

Chinamasa proposed a paltry budget with revenue generation expected at US$3,85 billion, as Treasury looks to public borrowing to fund the US$150 million deficit, reflecting the current economic crisis.

The recurrent expenditure this year, at US$3,685 billion, is 92,1% of the total budget but is seen rising to 93% next year, driven by a bloated public sector wage bill. At half a million workers, government workers are expected to gobble up about US$3,919 billion in salaries next year.

Chinamasa projected the economy would grow by 2,7% in 2016 from 1,5% this year, driven by key economic sectors which are expected to grow by between 1,3% and 4,5% despite unfavourable commodity prices on the global market.

Vapostori fail to raise US$100 bail

ZIMBABWE - Security ministries received some of the biggest allocations in the 2016 budget votes outside the Education ministries despite a marked shift in social spending, statistics show. According to the figures, Treasury allocated a quarter of the of t...
Share via
x
More Information
x