ZIMBABWE – An international research think tank says Zimbabwe’s construction sector has over the years deteriorated so much that it now ranks only better than that of the nascent nation state of South Sudan.

In its report published on January 1, United Kingdom-based BMI Research, which is part of the Fitch Group, ranked Zimbabwe second from bottom, saying prospects for the construction sub-sector of the country remained very poor.

“The country’s construction industry remains high risk, poorly financed and subject to the unattractive investment policies,” BMI said in its report on Zimbabwe.

It said that based on information on the ground, average real growth for the construction sector between 2015 and 2024 would be “a mediocre 2,6 percent”.

“We expect continued weak growth in the Zimbabwe construction industry as high risks, little financing availability and poor growth prospects ward off investors. As such, we forecast 1,4 percent real growth for 2015, and an annual average growth of 2,6 percent over the next ten years,” the BMI Research report pointed out.

The report added: “Zimbabwe is keen to encourage foreign investment, with China so far leading in-roads into the country’s power and mining sectors. However, even Chinese investment is lower than expected.”

The report highlighted that there were prospects for the construction industry in the mining and power generation sectors.

“We highlight upside potential for the power sector as Sable Mining Africa signed a memorandum of understanding with Chinese firm CITIC Construction to build a 600 megawatts (MW) coal-fired power plant at its 19 236-square kilometre Lubu coal mine in Zimbabwe. The mine will supply coal to the commercial power station. The project is part of the Zimbabwe government and Ministry of Energy and Power Development’s plans to promote the development of energy and power generation.

“The State Procurement Board (SPB) of Zimbabwe awarded tenders to three firms to develop solar projects with a combined capacity of 300 MW. Three photovoltaic (PV) plants, each with capacity of 100 MW, will be built by Intratrek Zimbabwe, ZTE Corporation and Number 17 Metallurgical China at Gwanda, Insukamini and Munyati respectively. The Gwanda plant will entail an investment of US$171 million, while Insukamini and Munyati facilities will cost US$160 million and US$180 million, respectively.”

South Sudan, the only country that Zimbabwe is outperforming, is the youngest in the African family of nations after it successfully seceded from Sudan following a brutal 23-year civil war that ended with a Comprehensive Peace Agreement of 2004.

The country only became a fully-fledged stand-alone nation in mid-2010 after a referendum in which an overwhelming majority of southern Christian Sudanese voted to confirm a war-time resolve to secede from the northern, Muslim-dominated, Sudan.

The BMI research polled 48 countries in Sub-Saharan Africa and it excluded failed states like Somalia and others where no data is obtainable.

In the research, Zimbabwe received an overall score of 23 out of 100, below the regional average for all indicators, with the lowest score for country risks in the construction sector.

At Independence in 1980, former Tanzanian president, the late Julius Nyerere, described Zimbabwe at “the jewel of Africa” because of its pristine infrastructure, but that infrastructure has since become an eyesore due to lack of upgrade and maintenance.

The country’s construction industry has been in the doldrums for more than a decade and a half, itself a hapless victim of the protracted economic crises bedevilling the country.

As testimony to the decline of the industry, there are hardly any cranes towering the country’s urban centres, with the only crane in Harare being found in the Glen Lorne up-market suburb at a site where the leader of a crowd-pulling Pentecostal church, the United Family International Church Emmanuel Makandiwa, is constructing a multi-storey home which includes a private hotel and several guest houses on a hill.

At its peak in the late 1990s, the Zimbabwe construction industry employed about 35 000 people, but by 2009 the figure had plummeted to about 3 000 and continues to dwindle as there are hardly any meaningful projects for firms in the sub-sector.

Most of the skilled and semi-skilled manpower in the sector has left the country for greener pastures while the rest have joined the ranks of the country’s unemployed.

Although it badly needs re-tooling, the construction sector has been excluded from duty-free import of capital equipment, a favour that has been extended to the mining, agriculture, tourism and hospitality sectors. 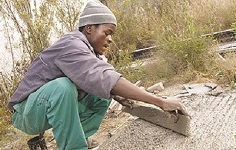 ZIMBABWE - An international research think tank says Zimbabwe's construction sector has over the years deteriorated so much that it now ranks only better than that of the nascent nation state of South Sudan. In its report published on January 1, United Ki...
Share via
x
More Information
x