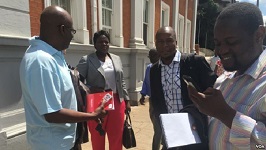 ZIMBABWE – Zimbabwe’s Constitutional Court has struck down a criminal defamation law that had led to hundreds of journalists being arrested in past years.

Justices from Zimbabwe’s Constitutional Court unanimously struck down the criminal defamation law after an official from the attorney general’s office, Venrandah Munyoro, was forced to concede the legislation had no place in a democracy.

She refused to speak to journalists after the ruling.

“No, I am not allowed to talk. [Coco: But you were speaking in court?] That was in court. [Coco: What is the difference?] I am outside court,” she said.

In their application, journalists from the Media Institute of Southern Africa argued criminal defamation was unconstitutional and violated media freedom guaranteed by Zimbabwe’s new constitution.

“It is a small victory in the sense that there are still a lot of laws which can be used to criminalize the profession of journalism,” said Ngwenya. “There is still a litany of laws that Zimbabwe still needs to fight; but, having said that, we are coming from [leaving] a period where criminal defamation was now the preferred law that members of the ruling elite were now using against journalists. They were wantonly and recklessly using the law where they felt the stories were quite unpalatable.”

Another law journalists want struck from the books is the Official Secrets Act, which criminalizes reporting on Cabinet meetings less than 25 years after they are held.

Nqaba Matshazi, editor of privately-owned daily The News Day, was one of the journalists who had taken President Robert Mugabe’s government to court over criminal defamation for a story published in 2011. He says the Wednesday ruling does not give Zimbabwean journalists the right to report lies as civil defamation can be used by an aggrieved party.

“You still cannot write recklessly; you still have to follow the ethics, truth and objectivity. The import of it is that you cannot be arrested for writing falsehoods or stuff like that. We have to remain objective; we can be sued and that still drags our name into the mud, all the same,” he said.

Zimbabwe is one of the African countries where media freedom is a rare commodity. Since the early 2000’s, several journalists have been arrested and some deported for various offenses under different media laws.

Carnival: Good going but . . . lessons for Mzembi and team