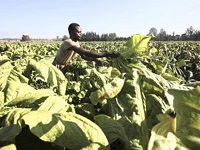 However, the government is optimistic that next year will bring brighter prospects, translating to 2.7 percent annual economic growth.

The signs of an economy in distress are seen all over.

Industries are slowly idling to a halt, there have been massive job losses and there is no hype for this year’s festive season, with no Christmas displays on shop windows.

Economic growth for this year has been a paltry 1.5 percent, in line with that of southern neighbour, South Africa.

Growth had been muzzled by subdued performances from agriculture and mining, Finance Minister Patrick Chinamasa said.

“The 2015 budget remained under pressure. In the nine months to September, there was a $527 million (R7.4 billion) budget deficit that was funded through domestic borrowing. Inflation has remained low and the negative inflation levels are expected to continue in 2016,” he said.

The deficit will be funded from domestic borrowings as the country is unable to access international borrowing as a result of debt and arrears that have ballooned to $8bn.

Investment flows have merely been a trickle, especially with investors worried over regulatory issues such as indigenisation.

Chinamasa said Indigenisation Minister Patrick Zhuwawo would publish final regulations regarding implementation of the policy in other non-mining sectors before Christmas.

“We want to eliminate indiscriminate application of the law,” he said, stressing that for mining, the resources foreign companies were mining would constitute payment for shares to be ceded by those companies into the hands of black Zimbabwean groups.

Respite for next year will likely come from mining and tourism although economists are less optimistic, saying lower commodity prices will subdue export earnings from minerals.

Zimbabwe produced nearly 20 tons of gold this year and it expected to produce 24 tons next year.

“Foreign direct investment will help save this economy and we need to restore confidence through sending the right messages that the country is a safe investment destination. We have not yet seen this and relying on commodities will actually backfire because metals prices are in a spin,” economic analyst Moses Moyo said.

Chinamasa admitted as much, saying “prices of hard commodities are likely to remain depressed”, although he still expected mining to grow by 2.5 percent next year.

About 23 percent of Zimbabwe’s import bill is accounted for by diesel and petrol while major export items are platinum, gold and tobacco.

Tourism has been one of the top performing sectors and the government expects this trend to continue.

However, the industry has faced negative perceptions from the implementation of VAT, which had resulted in operators in the industry hiking prices by 15 percent as they sought to pass on the cost to end users.

The Zimbabwe Tourism Authority said the country would have more tourists next year, with arrivals topping 2.5 million and the country set to benefit from “vigorous destination marketing and promotion”.

Expanded use of yuan to help revive Zimbabwe’s economy: Mugabe

Why Zimbabwe is now in the grip of deflation

ZIMBABWE - Harare - Zimbabwe is in trouble with subdued performances by mining, agriculture and revenue collections that are lagging budget projections.However, the government is optimistic that next year will bring brighter prospects, translating to 2.7 p...
Share via
x
More Information
x