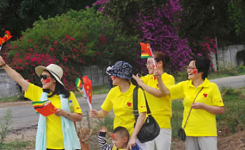 ZIMBABWE – China made emphatic moves to bolster its increasing influence in Zimbabwe this week, striking fresh deals in infrastructure rehabilitation and expansion of ageing power stations.

Zimbabwe has been desperate for solutions to address a vexing economic crisis that has persisted in spite of domestic interventions implemented in the past 15 years.

The deals, worth billions of United States dollars, inked between Zimbabwe and China, have come as a huge relief to a country that has been yearning for investments.

But while China is unequivocal about its desire to release funding and technical assistance to help an “all weather friend” emerge out of a debilitating economic turmoil, there are flaws in its selection of projects to be bankrolled.

This has led analysts to raise questions about Beijing’s commitment to restoring stability in Zimbabwe.

Analysts have, for example, raised questions about the proposed construction of a new Parliament, among other projects they consider to be of less strategic.

Another project considered as not strategic to Zimbabwe’s economic interest is that involving the construction of pharmaceutical warehousing facilities.

Analysts would have preferred Chinese funding to capacitate local drug manufacturers to save jobs and utilise some of the existing warehouses that are turning into white elephants.

“We have sufficient warehousing space in Zimbabwe. It is not a warehouse that we need. We need to develop our pharmaceutical manufacturing industry. We are not strategic in our negotiations. We cannot blame the Chinese. They will bring Chinese medicine into those warehouses and undermine local producers. We need to push the Chinese to set up manufacturing industries in Zimbabwe to create jobs,” Zembe added.

In the past, questions have also been raised about the expansion Kariba Power Station, with funding from China.

Climate change is affecting hydro power stations due to declining water levels, and experts have been calling for the commitment of such resources to the thermal power station at Hwange.

The Chinese have been pouring billions of United States dollars across high risk African states, including a US$9 billion pledge to the Democratic Republic of Congo in 2008, and US$13 billion pledges in Ghana five years ago.

Two years ago, China pledged US$5 billion to Kenya for energy projects, and they have been discussing transactions in Angola, Mozambique and other countries.

At the heart of China’s African expansion programme has been an appetite for Africa’s natural resources – oil, platinum and iron ore to feed its robustly growing industry.

He said what would make sense for Zimbabwe is a quota system in the supply of services for the projects to benefit small enterprises in Zimbabwe.

“The Chinese must not bring bricklayers, for instance. If we can push for our local contractors to participate in these deals, that will define our benefits,” said Gundani.

I will beat Mugabe: Tsvangirai