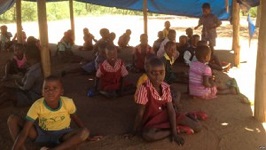 ZIMBABWE – Residents of the Chingwizi transit camp, about 400 kilometers south of Harare, were forced to evacuate their village when a nearby dam cracked and washed away their homes in February 2014.

After visiting the camp in August 2014, the rights commission asked the government to address the camp’s living conditions. Among other things, the commission said the residents should be relocated to a site where they could rebuild their lives.

But the head of the rights commission, Elasto Mugwadi, said little has changed since then.

“We stand by our recommendations: The best way out for these people [is] to be resettled elsewhere,” Mugwadi said, but “we do not have enough resources to discharge our mandate.”

Zimbabwe’s social protection programs have broken down. President Robert Mugabe’s government is strapped for cash and has mainly relied on international organizations and Western governments for humanitarian aid.

The government of Japan gave $1 million to UNICEF to reduce the risk of malnutrition, diarrheal diseases and sexual abuse among children and women at the Chingwizi camp.

Camp resident Stellah Manharwe said conditions have been improving, but a lot still must be addressed.

She said life had become much better, especially for women and children. But she said some children still have prohibitive distances to go to school, as much as 15 kilometers on foot. She added that waterborne diseases such as diarrhea had drastically gone down and that camp residents were grateful to Japan and UNICEF.

“Generally, child sexual abuse and child marriages, they are prevalent. Issues of [child] neglect, physical abuse are also prevalent among children in theses communities,” Zimhunga said. “Some of the cases of child marriages are driven by poverty, and some children, when they are out of school [at age 15 or 16] — some men capitalize on that: ‘Tthis child is no longer doing anything, so let us marry.’ ”

Mugwadi was appointed by Mugabe in 2013 to head the rights commission. Its mandate is to ensure that all Zimbabweans enjoy rights granted by the constitution, including the rights to decent shelter, health care and clean water.

But years after the Tokwe Murkosi floods, villagers at the Chingwizi camp do not have these things, and there is no indication of when or whether they will.

ZIMBABWE - Residents of the Chingwizi transit camp, about 400 kilometers south of Harare, were forced to evacuate their village when a nearby dam cracked and washed away their homes in February 2014. After visiting the camp in August 2014, the rights comm...
Share via
x
More Information