ZIMBABWE – Zimbabwe is in the throes of another debilitating drought blamed on the El Nino weather phenomenon that has seen some places in the world receive more rain, while others get nothing.

Some parts of the country in provinces such as Matabeleland and Masvingo have not received any meaningful rain, a few days before the planting season comes to an end.

El Nino is described as a warming of the central to eastern tropical Pacific that occurs, on average, every two to seven years.

Experts warn that the 2015/16 El Nino would be one of the most devastating, with world temperatures warming up to unprecedented degrees.

Zimbabwe is already suffering from the cumulative effects of poor rain seasons after last season also turned out to be drier than expected.

According to reports last week, the country’s maize stocks are already running low and the country is looking at increasing imports from South Africa and Zambia for the staple food.

However, the adverse weather conditions would also affect both countries, which means that they are unlikely to have excess maize going forward.

Zimbabwe would find itself importing maize from as far as Brazil very soon, but the big question is: can a government struggling to pay civil servants on time manage to carry that extra burden?

The government would not only be under pressure to ensure food security, but to also make contingency plans to save livestock that is now threatened by the drought.

Urban centres such as Bulawayo would face new challenges this year as their water supply dams are not likely to receive any significant inflows before the end of the season.

There were sufficient warnings about the occurrence of the “super” El Nino this year and lessons learnt from previous experiences abound, but the government does not seem to have learnt anything.

The government’s obsession with command economics is already making it difficult for millers to import maize to alleviate the looming shortages.

Cereal prices would predictably go up as the year progresses and it would be wise for importers to make orders now before the markets get volatile.

Agriculture, Mechanisation and Irrigation minister Joseph Made last week repeated the tired rhetoric that no one would starve despite the drought.

Yet, it is common knowledge that a large section of Zimbabwe’s population relies on food aid from international donors because the government’s social safety nets are now virtually non-existent.

The government cannot make promises based on what humanitarian organisations could do for starving Zimbabweans, but it also has to have its own plans to alleviate the effects of the El Nino.

Zimbabwe needs about 1,8 million tonnes of maize for human and animal consumption a year and last year private millers had been given permits to import about 700 000 tonnes.

This year the figure would certainly go up and there is actually no need for the government to be putting restrictions on the amount of imported grain because the country is not in a position to produce adequate food for its population.

A drought mitigation plan should have been rolled out as soon as the El Nino warnings were made several months ago and this should have included rehabilitation of water sources and irrigation systems.

Nonetheless, it may not be too late to act to save the situation and the authorities should plan for the worst in 2016 in terms of food insecurity and the survival of livestock. 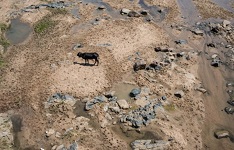 ZIMBABWE - Zimbabwe is in the throes of another debilitating drought blamed on the El Nino weather phenomenon that has seen some places in the world receive more rain, while others get nothing. Some parts of the country in provinces such as Matabeleland an...
Share via
x
More Information
x