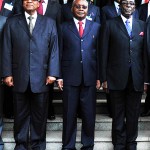 With Cabinet taking the lead in facilitating investment, both foreign and local, we were hopeful that the factors behind the current investor fatigue and capital flight would finally be a thing of the past.

It was refreshing to see government showing rare determination in addressing sticky issues that were militating against investment.

We saw the controversial Indigenisation and Economic Empowerment Act being amended to make it more investor-friendly. We also saw government taking steps towards creating a one-stop-shop for investors through Economic Processing Zones, of which a Bill to give effect to this concept will soon be passed by Parliament. We also saw a new Economic Planning Ministry being created to give momentum to these and other initiatives.

We were probably wrong to think that the leopard had changed its colours if recent developments are anything to go by.

Last week we woke up to news that government had shut down all operations of the country’s diamond mining firms because they had resisted a forced merger.

There was pandemonium in Chiadzwa last week as villagers descended on the diamond fields, amid reports that equipment belonging to some of the mining firms had been looted or vandalised.

With foreign direct investment inflows at US$400 million last year, which is a fraction of a minimum of US$4 billion that some of our regional competitors received within the same period, government is definitely scoring an own goal with these angry mob policies.

By acting in the manner it has done, government is adding misery to an already difficult situation and sending wrong signals to investors who will have no choice but to look elsewhere simply because Zimbabwe’s polices are not investor-friendly.

We have also been left perplexed by the decision by government to put an additional cost on imports through Statutory Instrument 132 of 2015.

While Zimbabwean importers are already struggling with some of the highest duties and taxes in the world, they are now being forced to pay a mandatory fee to have their goods inspected for compliance with high quality standards.

A French firm, Bureau Veritas, will from next month carry out the consignment-based conformity assessments on imported goods as part of measures to control shipment of substandard goods.

It is the timing of this additional cost that we feel has serious flaws.

Because everyone, including government, knows the dire financial state of local companies, the new requirements have added salt to fresh wounds.

For the ordinary person on the street, it means prices of goods would have to increase as companies incurring this additional cost would simply pass that charge to the ultimate consumer of the product.

The new fees will not only take us many steps backwards from the progress achieved so far, but it would leave investors wondering whether Zimbabwe’s situation will ever improve.

ZIMBABWE - Throughout last year, government fought hard to reduce the high cost of doing business in Zimbabwe. With Cabinet taking the lead in facilitating investment, both foreign and local, we were hopeful that the factors behind the current investor fat...
Share via
x
More Information
x