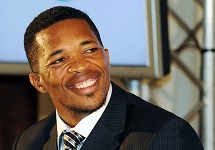 ZIMBABWE – Coaching at international level has been a “lifelong dream” of Makhaya Ntini’s, and he is eager to get going in his new role as Zimbabwe’s assistant to Dav Whatmore.

Ntini starts his role on February 16, and he says that while there is a lot of talent in the country they need to be in a far better position than they are currently.

Zimbabwe recently lost both the T20 and ODI series home and in the UAE against minnows Afghanistan, and Ntini says that is simply not acceptable.

“I think they have talented young players,” said Ntini.

“I’ve watched a couple of games when they played against Afghanistan. For me it was one of the saddest things seeing them lose.

“Afghanistan is a team that has just been promoted. Yes, they played well in the World Cup, but Zimbabwe shouldn’t be beaten by them … especially in a one-on-one series.”

Ntini, who launched his own school of excellence in the Eastern Cape in July 2014, says that a shift in attitude is needed.

“The changing of the attitude of the players is most important. That’s one thing that they’re lacking … to have someone that can
really put them in a position that they can understand the reason that they are playing this game,” said South Africa’s 101-Test, 390-wicket veteran.

Zimbabwe are currently in Bangladesh were they are playing in a four-match series.

Zimbabwe have the talent – Ntini

ZIMBABWE - Coaching at international level has been a 'lifelong dream' of Makhaya Ntini's, and he is eager to get going in his new role as Zimbabwe's assistant to Dav Whatmore.  Ntini starts his role on February 16, and he says that while there is a l...
Share via
x
More Information
x