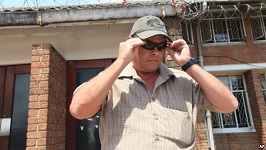 The charges stem from the killing of the lion in Hwange National Park, about 800 kilometers southwest of Harare, in July.

In return for a reported $50,000, Bronkhorst allegedly helped American dentist Walter Palmer lure Cecil out of a protected area, wound him with an arrow and then kill him with a rifle.

The killing sparked outrage from wildlife conservationists and forced the dentist to temporarily close his practice in the U.S. state of Minnesota.

After his court appearance Monday in the town of Hwange, Bronkhorst had a brief answer when asked by journalists if he was innocent.

“Absolutely; I still believe in the sustainable use of wildlife and I believe that at the end of the day wildlife must be the winner,” he said.

The 52-year-old hunter faces a separate charge of trying to smuggle 29 sable antelopes worth about $435,000 to South Africa.

This kind of intense crackdown for poaching and smuggling is a first for Zimbabwe. Since the Cecil incident, the professional hunting business has come under scrutiny.

Hunting has been banned in some parts of the country, and authorities have increased the number of anti-poaching patrols. That followed the Chinese government contributing $2.3 million for anti-poaching efforts in the country.

Prosecutors will respond to the two applications by the defense on Oct. 15.

Bronkhorst faces a $20,000 fine and up to 10 years in jail if convicted. Prosecutors will call five witnesses, including the owner of the game park where Cecil was killed.

Zimbabwe’s environment minister said in July the country was seeking Palmer’s extradition as a “foreign poacher.” Palmer would have to be charged before he could be extradited and Zimbabwe has not done this.