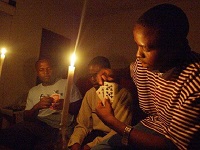 ZIMBABWE – The people of Zimbabwe are forced to live without power for periods of up to 48 hours in a row because supply can’t keep up with demand.

The government blames “angry river gods” for a rain shortage that reduced the amount of water flowing into the Kariba Dam — a major energy supplier for the country, according to the Associated Press.

The government has conducted rain-making ceremonies in the past and has another one scheduled for Saturday in an attempt to find a solution to its energy shortage.

Zimbabwe needs about 2000 megawatts (MW) of electricity per day, but the country only generates around 900 MW. Even when there is power, electricity comes sporadically. Often, it’s only available between 11 p.m. and 2 a.m. local time, Maxwell Shamba, president of the ZimFirst Party, an opposition to President Robert Mugabe, told Business Insider.

The prolonged periods without power aren’t just an inconvenience for the people of Zimbabwe; they’re also wreaking havoc on an already unstable economy.

“We’re seeing a ZANU Party (President Mugabe’s party) unabated, cronyism run rampant, with unreliable firms granted limited access to the industry,” he added, “and corruption festering from within government and the Zimbabwe Electricity Supply Authority, ensuring the days of ‘business by candlelight’ to be far from over.”

The energy problems have contributed to the deflationary environment that has crippled the country since the US dollar was introduced in 2009 as a means of getting the country’s hyperinflation under control.

Zimbabwe’s economy grew an estimated 3.2% in 2014 after registering growth of 4.5% in 2014. It’s forecast to grow just 1% in 2015, according to the World Bank. At that rate, Zimbabwe will grow at a rate well below the rest of the Sub-Saharan African region.

On Friday, All Africa reported the Infrastructure Development Bank of Zimbabwe (IDBZ) has raised a total of $45 million to fund three power generation projects in the country.

The bonds — which were floated in 2014 but have yet to meet their $65 million target — are designed to fund the repowering of three power stations in the country. In addition, the government has been touting a 250 MW diesel plant in the eastern city of Mutare.

“Their frantic efforts to build the much touted 250 megawatt electricity generation diesel plant in Mutare will  not help,” Shumba says. “In fact it will just increase the cost of electricity for consumers and an already burdened economy.”

Zimbabwe is being forced to do 'business by candlelight' — here's why

ZIMBABWE - The people of Zimbabwe are forced to live without power for periods of up to 48 hours in a row because supply can't keep up with demand. The government blames 'angry river gods' for a rain shortage that reduced the amount of water flowing...
Share via
x
More Information
x