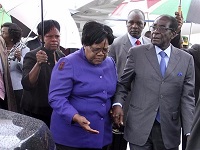 ZIMBABWE – Zimbabwe, a country endowed with natural resources is unfortunately perennially characterized by economic meltdown and social strife. National politics in the country are dominated by what I term ‘a North Korea lite’ political system installed by current President Robert Mugabe. The North Korea lite political system has three structures which work synergistically and in tandem to keep the ruling party, ZANU PF, and the Mugabe family in power. These structures, which I prefer to call the Triage, shoulder all the responsibility of the current economic and social malaise. The Triage is categorized as follows:

Today, each structure within the Triage constitutes a political pillar of power, functioning as system and can survive well beyond the current political names if it remains unchecked. Thus, as long as the Triage continued to operate freely, the economic and social strife we witness daily on the streets of Zimbabwe will persist, because the existence of the Triage care less about the people or providing the country with sound governance.

Personnel, depending on selfish needs of the time, are moved across the ranks of the Triage and this synergy over the past 36 years has made Mugabe’s agenda to cow people an easy task. It is therefore, safe to say until the Triage is effectively destroyed and a democratic system is installed, Zimbabwe’s political and economic problems will persist.

It is because of this fact that those who celebrate or torch the social media with news of Mugabe’s rumored death are holding vanity celebrations, and will be disappointed to learn that current problems in Zimbabwe are now beyond the agenda of only removing Mugabe as a means to an end. The same can be said against the sad but commonly held view that an opposition leader will prevail against this well established system based on his popularity of his name or size of his support base. Dealing with this well rooted system demands a very thoughtful approach and a foolproof strategy which is novel and surgical.

Typical of a country under a dictatorship, Zimbabwe has a plethora of opposition political parties, close to twenty nine in total. Each party was born out of efforts of individuals frustrated by both Mugabe’s rule and the apparent failure of existing political parties to dislodge Mugabe from power. As early as months after independence, when opposition to Mugabe’s rule began to take root in Zimbabwe, initially spearheaded by ZANU, a former partner to ZANU during the war of independence, the story has either been ruthless of a suppression of the resistance or of so-near-yet-so-far after every election cycle.

What has been lost to opposition parties in this process (except ZAPU under Joshua Nkomo) is that when cornered or faced with apparent loss of political power, the Triage, namely, Mugabe State (President’s Office), ZANU PF Political Party, and the ZANU PF run government swiftly mobilize around one objective, that is to keep ZANU PF and Mugabe in power. Nothing else matters at that point. They become ruthless. It’s well documented that murder and mayhem have visited the populace to cow them into accepting whatever result the Triage cook. The results of their heinous are the reason why Zimbabwe make international headlines for the wrong reasons.

For the opposition, it is worthy to note that their main shortcoming is that they view ZANU PF as a civilian party. No, its not a civilian party and as such demands for electoral reforms betrays the political naïveté within political ranks and as such the current efforts under National Electoral Reform Agenda (NERA) spearhead by some individuals in civil society with the support of some political parties will not bear any tangible result. A non civilian party does not enact reforms which result in it losing power and will not give up power on a platter.

The same can be said about the misguided efforts by some in opposition ranks to forge a grand coalition of opposition parties. As long as the signatories to the said grand coalition hold the same fallacy view that ZANU PF is a civilian party and can be defeated by popularity alone, the said coalition will be an exercise in vain.

The likes of former VP Joice Mujuru understand the context of my words is the reason why she is not openly coming out in open opposition to Mugabe rule. She can oppose as long as she is within the confines of ZANU PF. The factional fights are within individuals and not ZANU PF system and the public spat will do little damage the center of the ZANU PF political power. Those who are celebrating the rumored entry of Joice Mujuru into opposition politics should hold their breath. The reality is Joice still has a chance in ZANU PF to get the hold of the steering wheel of the ZANU PF machine. Therefore, current efforts by her supporters under the name People First, a name they stole from the author’s of Zimbabwe First (Zim First Party), can best be described as a regrouping of those party officials who were purged out by her rivals as part of the ZANU PF succession politics.

Joice Mujuru, much as she might appear as a darling to the people’s cause, is no different to the pre-2008 Jonathan Moyo when he was booted before the 2008 watershed elections. She can be trusted at the beholder’s peril. She is not a people first person and her supporters are not people first, either. Ask the villagers in Dotito who gave nothing to show for supporting the past 35 years.  The commendable aspect of her behavior, is that her aloofness and silence has kept her rivals in ZANU PF on their toes and the regrouping of her supporters has given their adversaries sleepless nights.

If the right ingredients are mixed and thrown in the mix at this stage, that’s a boon that can catalyze a chain reaction with many positives that might result in accelerating the disabling of ZANU PF as war mongering  machine . BUT, is this what Joice wants? Does she really want to see ZANU PF dead? The answer is up in the air and betting her to be the opposition shining knight in armour might be well misplaced. So far she has not done anything to show that she is ready to do battle against the Triage.

A People’s Grand Coalition under the key principle of ‘fresh ideas and fresh legs’ is required. New ideas and new faces are needed to carry on the torch from past opposition political leadership who within their capacities have done a lot of commendable work under difficult conditions. But it’s time to pass the torch to fresh blood.

The next phase should be lead by dedicated people willing to sacrifice for the people, dedicated individuals who understand the core fact that dealing with ZANU PF means dealing with the Triage which is fortified, ruthless and celebrates the shedding of innocent blood.

This next phase has to be apprehensive it will have to deal with the Triage whose application of a fear factor is well rooted in the fabric of the Zimbabwean society, and has managed to induce fear where ever Zimbabweans meet.

The next phase needs brains, not brawn. With this in mind its important to note that a People’s Grand Coalition will be grown organically from people who understand that everyone will have a part to play either overtly or covertly.

Dealing with ZANU PF will go beyond holding rallies or demonstrations to demand electoral reform. It will not be a masses business only, but a joint effort between the few who will be designated to deal specifically with the Triage and the masses preparing for a new era of prosperity and respectability.

Today, the truth is that the Zimbabwean population is tired of national politics and would rather focus on politics of the stomach. The behavior of Zimbabweans, whether they be at home or abroad, is marked by a clear disinterest of politics of their homeland. This is typical of a population under a ruthless dictatorship. The current state of affairs is not a hap-stance, it is a result Mugabe and his cohorts worked very hard to achieve, under our noses, investing nearly the entire the country’s wealth towards this result.

Today, the world is amazed at the docility of Zimbabweans. Who can blame the Zimbabwean people? They are prisoners of a dictatorship which was carefully built over the past 36 years. The people have seen their relatives imprisoned for merely asking for what is theirs and enshrined in the Constitution of the land. They saw their loved ones tortured, maimed, murdered or disappear in broad daylight with no recourse in the justice system. They have been lied to by some who came to them as democratic liberators but were simply fortune seekers with no zero interest in the people’s business.

Its a disheartening and hard to stomach to see civil society organizations, in their unity, who once formed a formidable force of opposition and were sure guarantors and vanguards of civil liberties being swallowed by the Triage or becoming appendages of the same. The civil society is a shell of what it used to be in the early 2000’s, therefore, their impact in helping defeat the Triage is almost zero. Many of the key civil society players have opted to become analysts and inadvertently promote the Triage’s agenda of normalizing the abnormal in Zimbabwe. The Triage use the very existence of civic society in Zimbabwe to showcase to the outside word the existence of democracy in Zimbabwe.

So what is the way forward for Zimbabwe? I can confidently state that if people invest in ZimFirst Party’s vision of a peaceful, just and prosperous Zimbabwe, they are investing in the opportunity of a brighter future. It is the party which is currently in building mode, whilst others are groping in the dark for a way forward. Already in this party, technocrats who constitute the party’s think tanks have begun to shape and put in shape the structure of a future lean and development focused government. A government whose beliefs lies in the fact that the economy is not money but people and thus investment should primarily in the people first. Completing the efforts of the Think Tanks, the party through its well established brick by brick concept for building a solid foundation for the country, is a building a solid foundation of a new society.

ZimFirst is engaged in educating the people that with the methodical, meticulous and thorough preparation, it is well paced to lead efforts towards building a People’s Grand Coalition that is focused not only on removing Mugabe, but has a broader vision for the country to bring a Zimbabwe that is working again by creating jobs and providing good governance. Zimbabwe First Party fully understands the challenge involved in defeating the Triage and bringing Zimbabwe back to the people.

ZIMBABWE - Zimbabwe, a country endowed with natural resources is unfortunately perennially characterized by economic meltdown and social strife. National politics in the country are dominated by what I term 'a North Korea lite' political system installed...
Share via
x
More Information
x