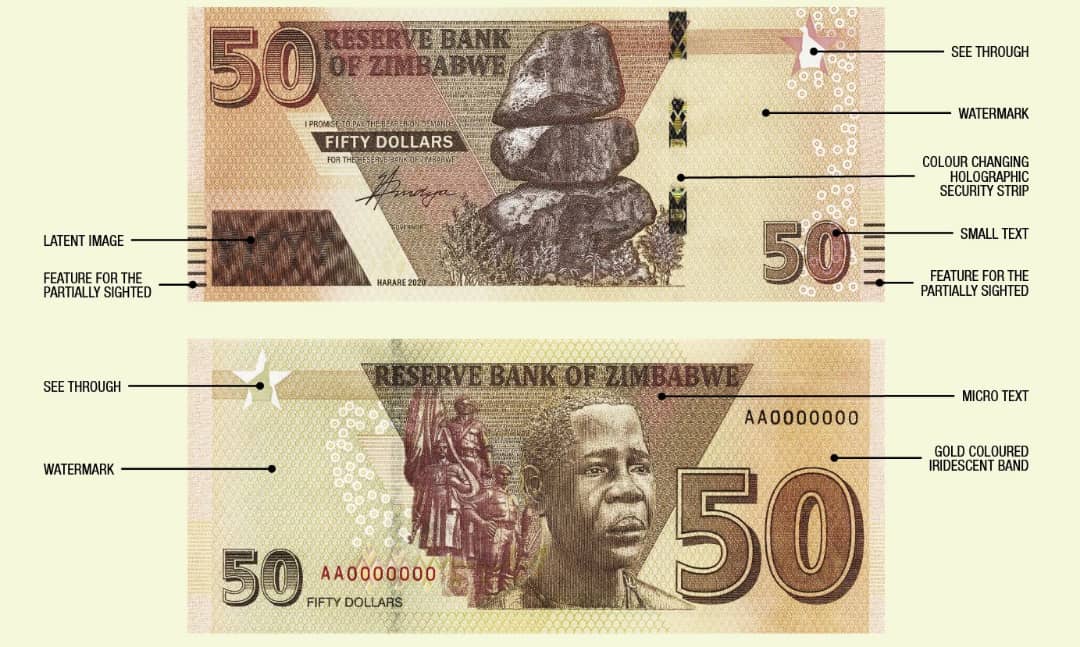 HARARE – Zimbabwe on Tuesday announced the introduction of a new $50 note which will go some way in relieving Zimbabweans of the burden of carrying wads of worthless cash to complete simple transactions.

Zimbabweans still need almost three of the new notes to buy bread which costs Z$130 or US$1.

The $50 will circulate alongside lower denomination notes introduced in November 2019 which on their own are virtually worthless. These include the $2, $5, $10 and $20 notes.

Reserve Bank of Zimbabwe governor John Mangudya said in a statement that the central bank would be releasing Z$360 million of the $50 notes which features the Tomb of the Unknown Soldier, the famous balancing rocks and a motif of spirit medium Mbuya Nehanda

Nehanda was recently honoured with a statue in central Harare by the Zanu PF government, at which traditional rites were performed invoking her spirit to turn around the economy.

Notable security features of the new $50 note include a colour-changing holographic security strip, gold coloured iridescent band, and a windowed security strip that changes from red to green when tilted.

Cash is the preferred method of transacting business in an economy where unemployment is above 80 percent and the majority of citizens earn a living from trading in the informal sector.

After the trauma of hyperinflation, when many were left impoverished after losing savings and pensions, Zimbabweans tend to prefer to keep cash at home because they have little faith in the country’s financial system.

Black market traders, taking advantage of cash shortages, have been selling banknotes at premiums of up to 40 percent, a practice the central bank wants to end by printing more bills.

Zimbabwe, which has battled hyperinflation for years, reintroduced its domestic currency in June 2019 hoping to phase out the use of foreign currencies, mainly the United States dollar, which started a decade earlier.

The new currency had lost more than half of its value less than a year later, forcing authorities to legalise the use of foreign currencies in domestic transactions again.

A foreign currency auction system introduced by the government has lost credibility amid fears that it is fixed. One United States dollar was pegged at about Z$85 last week, but leading retailers and black market traders are using rates upward of 1:130 which the central bank has sought to criminalise.

The Zimbabwe National Chamber of Commerce this week said the auction system rate was “superficial” as it demanded the adoption of “a market-determined exchange rate.”

Mafume rejects the validity of his recall, says ‘it will be an embarrassment to any person who purpots to act on that letter’

HARARE – Zimbabwe on Tuesday announced the introduction of a new $50 note which will go some way in relieving Zimbabweans of the burden of carrying wads of worthless cash to complete simple transactions. Zimbabweans still need almost three of the new not...
Share via
x
More Information
x