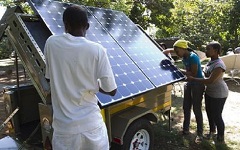 ZIMBABWE – Harare – Zimbabwe’s government launched a solar energy policy on Wednesday as it attempts to reduce a major power shortage in the country.

A drought affecting the country’s hydro plant at the Kariba Dam and the “abundant sun” in Zimbabwe made the solar project a priority, Vice-President Emmerson Mnangagwa told parliament.

“As you know Zimbabwe is blessed with abundant sun, we can’t increase dependence on thermal power given that Kariba Dam is drying,” Mnangagwa said.

Zimbabwe is currently producing less than half of the 220Mw the country requires.

Much of Zimbabwe’s power comes from the Lake Kariba hydro plant, but the lake’s water levels have dropped recently due to a drought. This has affected power supply for both Zimbabwe and Zambia.

The main component of the policy is the discontinuation of electric water heaters, known as geysers, which will be replaced with solar powered ones.

Udenge said in an interview with dpa that Zesa would import solar heaters from China.

“We want this to be easy on our customers, so Zesa will then install the geysers and then customers pay for the geysers over a maximum period of three years,” he said.