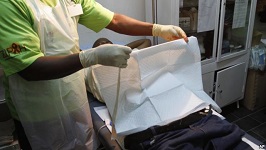 ZIMBABWE – Despite a critical shortage of nurses and midwives in government hospitals, cash-strapped Zimbabwe is maintaining its freeze on recruiting new staff, worsening problems being experienced in the country’s health delivery sector.

Some nurses and midwives who graduated recently at Mpilo Hospital in Zimbabwe’s second largest city, Bulawayo, may find the going tough as government is currently not recruiting staff due to lack of funds.

The three-year course for general nurses and the one-year programme for midwives are very demanding and so it is not surprising when graduates are on cloud nine after years of hard work.

But their joy is normally short-lived as they quickly come to terms with the reality on the ground.

Studio 7 caught up with Patience Ncube, who was among the recent graduates. Ncube received several prizes including that of “Best academic performance throughout training”.

“I’m happy that I’ve finally managed to get my diploma; and then getting the prize, that was beyond my expectations. It came as a surprise to me. My aim was to get the diploma, and I’m excited that I managed to excel,” she said.

Despite her accomplishment, Ncube is among several graduates from her class of just over 100, who are yet to get employed.

Although Zimbabwe’s health delivery service system is burdened by a shortage of manpower, among other problems, there is a freeze on recruitment of more staff due to unavailability of funds stemming from an economic crisis that has seen government struggling to pay its workers.

This is worrying all the graduates including Ncube, who said, “You know it’s not easy to go through the three years of training. It’s hard work; you have sleepless nights, and then after finishing that you can’t be employed…you are staying at home like you did nothing.

“And then you don’t know when you will be employed…may it could be after two years or so. It’s demoralizing, I can say.
Deputy Health Minister Aldrin Musiiwa said his ministry is aware of the problems in the country’s health delivery service system, including the freeze on the recruitment of nurses and midwives.

He said the ministry has approached the government to avail more funds so more staff can be recruited.

Paul Dube also graduated recently, and is also still unemployed. He, however, remains hopeful that he will get a job soon.

Besides being largely seen as bloated, Zimbabwe’s civil service also has a problem of so-called ghost workers -people who are on government payroll but do not really do any work.

Government is currently carrying out an audit in the education sector as a way of dealing with this problem.

But a nurse, who refused to speak on tape as he is not allowed to talk to the press, said government can employ more people in the essential services like health and education if it gets its priorities right and cuts unnecessary spending.

As part of trying to deal with the problem of failing to recruit more nurses and other workers, government has mooted the idea of exporting some of its graduates to other countries.

While agreeing that it could help create employment and also earn the country some revenue through remittances by those who will have become expatriates, researcher Butler Tambo of the Public Policy Research Institute of Zimbabwe said the proposal is not sustainable.

He suggested that government should recruit more health care personnel through reducing workers in other government departments that are less critical.

Tambo said, “Exporting these people who already are in their low numbers is not a good move as far as I’m concerned. The question is: what about the cost that government would have incurred in training these nurses? To me it doesn’t make sense because it means we are going to lose money by training more people that we are not going to retain in our health care system.

“On how we can solve this problem; we have been recruiting more and more police officers, more and more prison guards and the like. Do we really need so many of them? My answer is a clear no because I’m not seeing an increase in the crime rate in Zimbabwe to justify more manpower in this particular area.”

Until Harare deals effectively with the current economic crisis and boosts revenue levels, nursing graduates like Ncube and Dube will remain unemployed despite the need for such people in the health sector.